The Polish MP-4 is an unlicensed clone of the US M17 gas mask series. The first known prototype models were made in 1970. They were made of dark brown rubber with dark coloured eye lens frames and voice emitter. The rubber straps were made from the same type of rubber as mask itself. Every of them has many small "checkmark" shape embossings to correct seal. Probably no more than a few hundred pieces have been produced. Today only two existing pieces are known. In years 1971-1972 there was model known as the OM-MG-2, and it was near identical to a final MP-4, except for it having black eye lens frames and voice emitter. They are also known examples with rubber straps similar to these from the first prototypr series. The design was finalised in 1973 and production began the same year. Masks were issued to all branches of forces of the Polish People's Army and remain there until the 1990s.

The MP-4 only had minor changes to its American counterpart. Most notable differences are lenses, they are slightly farther apart, the frames and voice diaphragm being a silver colour, as well as the 'nose', which is slightly less pronounced. First production models were made from olive-green rubber, however, it wasn't until 1983 when they changed the mixture and rubber to a grey colour.

The Polish MP-4B was a limited-production version of the MP-4. It only had minor differences from it's base design however.

Around the 1990s, drinking tubes became a popular feature for military and civilian masks. The mask differs from the MP-4 with the aforementioned drinking tube and by a different voice emitter cover. The drinking tube is located on the bottom and is covered by a cap, which can be threaded on and off, similar to the Israeli M15. It can also be moved around, the wearer could move the tube closer to their mouth if desired. The mask was soon pushed aside, as did the cheek filter design for the superior STANAG compatible MP-5. Then later by the newer MP-6. 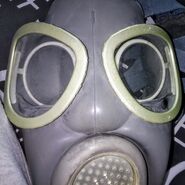 MP-4 carrier design is similar to original M17s. The main pouch contains a place for mask and anti-fog device, and like all other pockets is tampered by metal poppers. The bag has two little external bays to hide bag straps when not in use and a bigger one for the IPP-51. MP-4B's carrier it's made from rubberised material, making it waterproof and efficiently protect the contents inside the bag. It's also quite bigger due to the need for space for a plastic drinking bottle and has an additional pouch for drinking tube.

The mask was issued with twin cheek filters that were to be put inside internal pockets of the facepiece. Those could not be replaced with the mask on.The factory-packed filters were hermetically sealed in foil (green or gray) and packed in a foil bag.

Some MP4s and MP4Bs have instead of gray, white straps. Only difference is, that white ones are more elastic. They are only in late production ones.

A Polish soldier with an MP-4 during an NBC training exercise. 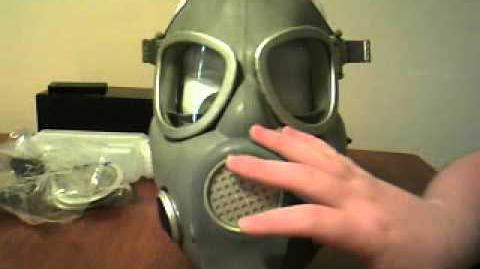 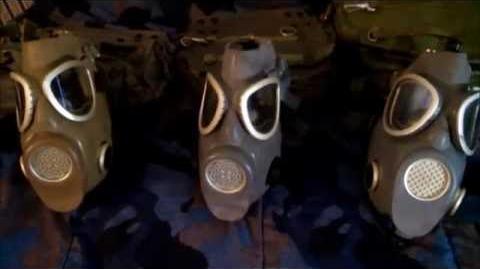