The Advantage 1000 Low-Maintenance Full-Face Respirator was developed in early 1990s as a civilian version of MCU-2/P (probably put on the market around 1993).

Like it's predecessor, it features a wraparound flexible polyurethane lens that offers a comfortable fit with decent vision but slowly discolors to yellow at UV exposure. However, unlike MCU-2/P which was made of silicone, Advantage 1000 is constructed of soft Hycar nitrile rubber.

The unit also has a speaking diaphragm for communications, which is identical to one of M40, and a nosecup to reduce lens fogging.

Like MCU-2/P, the facepiece is available in three sizes and has a inturned lip that provides a strong seal. However, instead of a convenient six-point mesh head harness on the military predecessor it has much more simple fully elastic one. The bottom exhale valve is also much simplified, since the mask lacks the drinking tube.

After the gas mask was highly appreciated by Seattle police department in clashes with protesters against the WTO conference in 1999[1], MSA developed a militarized version of the Advantage 1000 dubbed MSA Millennium with 40 mm STANAG screw thread. 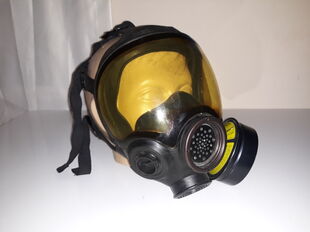 The inside of the gas mask


Cite error: <ref> tags exist, but no <references/> tag was found
Retrieved from "https://gasmaskandrespirator.fandom.com/wiki/MSA_Advantage_1000?oldid=43340"
Community content is available under CC-BY-SA unless otherwise noted.