Edit
watch 01:32
She-Hulk Trailer Dropped - The Loop
Do you like this video?
Play Sound

The Mark V General Service Respirator was a Second World War-era gas mask issued to the British Armed Forces and to other armies in the Commonwealth.

DISCLAIMER: A LOT OF THE INFORMATION IN THIS ARTICLE IS KNOWN TO BE FACTUALLY INCORRECT. PLEASE REFERENCE THE MK. IV GS RESPIRATOR PAGE UNTIL THIS ONE IS UPDATED.

The Mk V respirator, at its most basic level, was essentially another iteration of the Mk IV. First appearing around 1940, the design is not too much changed from the earlier Mk IV respirators - with the notable exception that the facepiece lacks the stockinette. The stockinette was removed for two main reasons. Firstly, it made the Mk V cheaper to produce in a war economy. Secondly, the small fibres of the stockinette were thought to be capable of trapping deposits of deployed chemical weapons, thus stockinette-covered masks presented a potential decontamination issue. Early Mk V respirators still had stockinette on the hoses but by 1941 this had also been removed, leaving the mask in just plain rubber. The microphone port became standard unlike on the Mk IV.

Around the time the Mk V was adopted. Another Variation of the mask was introduced. This Mask was the Mk Va GSR. It incorporated a longer hose about 3 times longer than the regular hose used with the Mk IV and Mk V masks. The reason the mask had a longer hose was than before was because some of the branches of the British military like the RAF found out that the way the mask was chest carried was too restrictive. So they adopted this Mask instead. The Mk Va was essentially a stop-gap replacement for the Mk IVa Which was of the same design, The only difference being that the Mk IVa used the Mk.IV face piece instead.

Despite being mostly supplanted by the Light Anti-Gas Respirator, post-war documentation suggests both the Mk. V and the older Mk. IV Special T Mic were to be employed in an event requiring communication equipment. Three particular models of respirator were listed as being especially suitable for tele-communication personnel:

The preferred respirator depended on the communication equipment used. For operators of static equipment (e.g. Switchboards) one of the GS models was preferred because the microphone was permanently attached to the facepiece. For operators of field sets, a light respirator was considered more suitable. Generally, 2 models of microphone attachments were used. The respirator microphone No.1 had a long wander lead and plug, which was designed to be used with field sets. The respirator microphone No.2 had a recessed jack plug which connected to a wander lead on a static set.

The MK.VIa haversack was essentially a regular MK.VI haversack but Incorporated an attachable waist strap that was a more comfortable and had a more ergonomic fit compared to the regular waist cord that normally issued with the carrier.

Mk.V General Service Respirators would be produced and used by the Commonwealth of Australia in from 1942. The facepieces would be produced by a variety of Australian rubber companies, such as Kenworth, Spalding, and Olympic Tire & Rubber Co, with the masks being assembled at Munition Supplies Laboratories, Maribyrnong in Melbourne, Australia. The masks would be used by all branches of the Australian military, and saw use up until the early 1960s.

Mk.V GSR in use at HMAS Penguin, Australia in 1961

Portugal imported masks for the military, Civil Defence and firefighters.

Mk.V GSR is featured on the cover image of Kuolema album under the name of 'Mölyä Perkele!!!'. 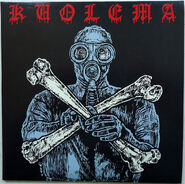