The Model KNIL was a mask that was issued to the KNIL (Koninklijk Nederlandsch-Indisch Leger, Royal Netherlands East Indies Army). It had a hose and a large filter. It somewhat looks like the Model H. Almost nothing is known about this mask, and the only known surviving ones are stored in the Dutch Military Museum and the Dutch Marine Museum. The rectangle looking little box below the hose most likely houses the exhale valve. It was issued as part of the standard kit to KNIL soldiers, somewhere in the 1930s.

Closeup of the facepiece

Mask with the filter

Mask connected to what might be an air bladder and a large hose, a diver or a firefighter perhaps 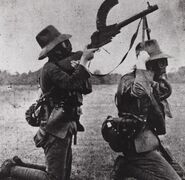 Various KNIL soldiers with masks
Add a photo to this gallery
Retrieved from "https://gasmaskandrespirator.fandom.com/wiki/Model_KNIL?oldid=41318"
Community content is available under CC-BY-SA unless otherwise noted.