The 36M, or better known as Népgázálarc (People's gas mask) is a Hungarian civilian gas mask that was available for civilians before and during the Second World War.

It is a full face mask made of a single sheet of rubber-coated claret canvas formed by 3 seams, 1 on each temple and one on the chin. It seals on the face via 4cm wide canvas stitched to a rubber-coated canvas verge and folded out to the outside of the mask where the seam is sealed by a thin rubber layer. The eyepieces are made of celluloid and permanently placed in pressed raw aluminium assemblies, however earlier ones had balck painted assemblies. The 6 pointed, adjustable and elasticated harness is composed of three pieces and sewn to the facepiece. The 2 forehead straps are hooked over the metal roller frame of the strap which leads to the nape where, alongside with the temple straps it is hooked up to a metal piece which is riveted to a leather pressure equalizer rectangle. The third part near the bottom would be wrapped behind the neck of the user and hooked to the right side of the mask to provide a tight seal and to prevent accidentally taking off the mask, inside the there is a chinstrap as well. The aluminium intake valve housing sports a 40mm DIN thread and on the inside there is a wool ring which meant to absorb humidity. The "tulip" styled exhale valve is placed under the left eyepiece (the same intake and exhale valve housings were used on the later Ipari félálarc). It was made in 5 sizes, unlike the Cold War Hungarian masks the size 1 is the largest and size 5 is the smallest.

Inside, the rubber coating dried out and fell of. 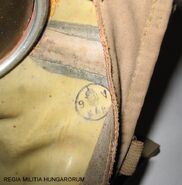 The neck strap hook is on the right side unlike on the 34M.

The filter is green painted cylindrical canister filter. A sticker covers the intake which had to be torn of before use.

The bag is a basic canvas bag with only one big part inside. The kit contained:

The kit was 13 Pengő. A cheaper option packed in a cardboard box was 11 Pengő. Spare filter was 2,50 Pengő. The kit could be bought in the shops of Mercur Műszaki és Vegyipari Rt., resellers (like "IGÉVÉ" Ipari- és Gázvédőezközök Kft.) or ordered through a newspaper. Légoltalmi Liga (the predecessor of Polgári védelem - Civil Defence) organised an aid project to collect money for the gas masks of the poor. It could be supported by buying a special stamp.

Order form, one of the few official document that call it 36M.

Common misinformation that these masks were made for children because of the small sizes and color. Of course the smaller ones were for children.

Many know this this mask as just Népgázálarc, however, it had a xxM number as well. Specifically, it was the 36M, the reason why this designation is not well known is that the newer, easier to understand for civilians naming system (M. gázálarc, Mg. gázálarc, T. gázálarc) was used from 1936 so the period when it was called 36M widely was very short. Many pepole also know this mask as 35M, while indeed the 35M is a completely different, lesser known mask which was meant to be the cheap people's gas mask but proved to be inferior to the 36M. For the Ruthenians in Hungarian occupied Transcarpathia it was called H. противогазъ (Ukranian: Hародный противогазъ - Narodnyy protivogaz).

According to some references the mask was manufactured after the war until 1956 because of the Cold War and Yugoslav threat. But this is very unlikely, the source probaly confused it with the 34M which was produced til the 1960s.

"Légoltalmi liga teaches you how to use a gas mask correctly"

An example with painted exhale house, it has probably the same color as the filter.