Grey rubber full face mask with glass eyepieces crimped on by metal assemblies. The five-point elasticated head harness connects to the mask with moulded in metal buckles, on the back the straps connect in an irregular textile hexagon. The valve house is very basic, it is squeezed to the face blank by a wire which is covered with textile tape. The hose is fixed and the inhale valve is a rubber disc on a pin. The exhale valve is "tulip" styled just like the first valve on later ShM masks.

The only difference is the simplified texture of the faceblank.

The MOD O-8 (Russian: Модернизированный Oбразец-8 — "Uprgaraded Model-8") featured major updates. The faceblank rubber became thicker and easier to manufacture. It got one big Tissot-tube between the eyepieces and now there is an option to use anti-fogging inserts. The valve house was slightly updated as well.

It got a voice emitter and the one big Tissot-tube was divided into two smaller ones to not to reduce the effectiveness of the voice emitter.

The T-4 and the MT-4 were big flat canister filers with a 4x40mm thread later standardized by GOST on the top.

Throughout the years several bags were used with it, like 1928 type, 1939 type and Type A. All of them are very basic canvas bags. Inside there are 3 sections and 1 little pocket. The two same-sized parts are for the filter and the mask. There are 2 strips on the inner side of the filter part to fix the hose during use. The little pocket is for the antifog inserts. The big flat part is for the hose. It has 2 straps, one around the shoulder and the other around the waist. 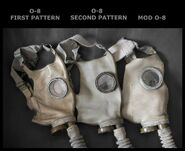 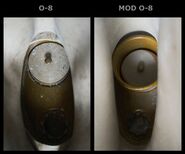 The Tissot-tube connects to the metal ring on the MOD O-8.

Soviet firefighters. The left soldier is wearing an Sh-1 with voice diaphragm and the right is an O-8.
Add a photo to this gallery

Retrieved from "https://gasmaskandrespirator.fandom.com/wiki/O-8?oldid=43068"
Community content is available under CC-BY-SA unless otherwise noted.