The P.C. 30 was the first widely issued Italian mask made for the civilian population. It was mainly used during training and drills and was never issued to civilians outside the aforementioned.

Note that due to the almost total resemblance to old-patter P43s, it's almost impossible telling them apart in a picture, save for context.

The P.C. 30 was composed of a flat-moulded faceblank made of smooth green rubber to which the following were attached:

The filter resembled the earliest Dirin filters. It was made with various blocking substances in multiple layers. The filter itself was openable, allowing users to change the cotton layer and the other parts. To use the filter, the user was required to remove the card layer over the filter's intake. 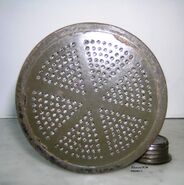 Bottom of the filter

Filter partly disassembled
Add a photo to this gallery

The mask came in a metal cylinder with straps containing its filter, instructions, spare exhale valves, anti-fogging soap and the mask itself.

Close up of the container 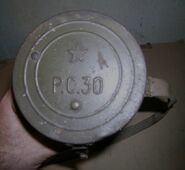 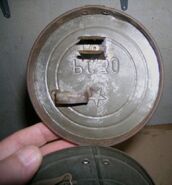 Inside
Add a photo to this gallery

The P.C. 30 is the first-ever Italian mask designed for the civilian population before the sale of S.C.M. licensed masks. This mask was used mainly for propaganda and ONB use, it was never issued to the population outside a few training and drills.

P.C. 30 being used during a drill alongside T.32 masks

P.C. 30 being used during a drill alongside T.32 masks

P.C. 30 with unknown filter. This picture was taken from the 6th May of 1934 edition of "L'illustrazione italiana". Even though the mask was described as a mask for the civilian population, it might, in fact, be a P43, since there was another similar mistake in the same page.

Testing the inhale valve on the P.C. 30

Testing the exhale valves on the P.C. 30
Add a photo to this gallery
Retrieved from "https://gasmaskandrespirator.fandom.com/wiki/P.C._30?oldid=43365"
Community content is available under CC-BY-SA unless otherwise noted.