The P.C.40 was the last main civilian mask design produced in Italy before the end of the Second World War. Early on in the War, it was sold directly by the State to the population, to those in the risk of a chemical attack. Later, some were issued by the state for free to some corps, and it was used both passively and actively in place of other masks.

After the end of the War, an updated version was produced for unknown reasons.

The P.C. 40 design is based on the T.35, with a series of changes to make it cheaper to produce.

The faceblank, made of a thin foil of moulded rubber; it has the following parts attached to it:

The exhale valve allows exhaled air to go outside and prevents poisoned air to get in. It's made of rubber, it opens under the light pressure of exhaling and closes hermetically under the negative pressure produced by the inhalation. It can be easily inspected and possibly replaced by unscrewing the lid of its housing, made with aluminium to be cheaper.

The eyepieces are made of cellulose acetate instead of the previously used "Triplex" glass. The glasses are affixed to the mask through aluminium frames. Size 4 masks use smaller lenses and frames to better fit the wearer.

The elastic harness, based on the T.35, has the goal to keep the mask tightly onto the face. It is composed of 5 adjustable straps (a top one, two elastic temple ones and two elastic cheek ones) attached to the facepiece, and they gather into a nape pad, which is much smaller than its predecessor's.

The quality of the parts and the rubber decreased during the war due to dwindling stocks of quality metal and natural rubber. In some cases, the colour of the paint was changed, due to unknown reasons. 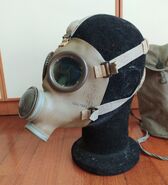 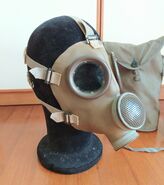 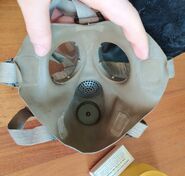 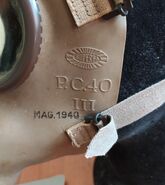 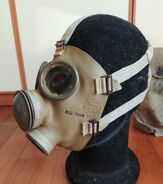 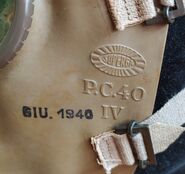 Marking from a Superga size 4 sample

Marking from a Pirelli size 2 sample

Three Superga masks, from left to right: size 2, size 3 and size 4
Add a photo to this gallery

The filter had the same shape as the Pirec38 filter but was painted yellow. It featured a paper disc on the inlet that was to be removed when the mask was to be used. 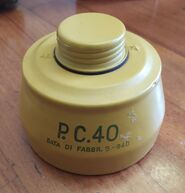 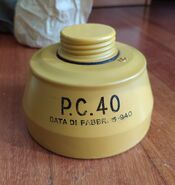 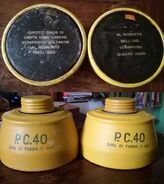 Two filters, dated 1940 on the left and 1941 on the right. Note the shorter text on the right one
Add a photo to this gallery

The mask came in two different kits: most masks were stored in a cardboard box and came with the filter, a stick of anti-fogging soap and the manual. Some masks had a dedicated cheaper variation of the T.35 bag and had the same accessories. 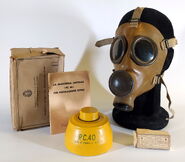 Pirelli P.C. 40 anti-fogging soap
Add a photo to this gallery 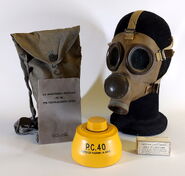 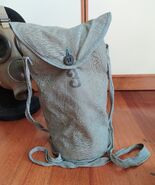 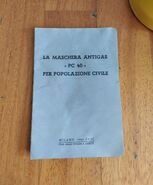 anti-fogging soap
Add a photo to this gallery

After the end of the war, the production of this mask did not cease but switched to different materials and hardware, while maintaining the same setup.

The main differences are:

The usage, kit and distribution of this mask are unknown, as no info has been found on the topic yet. 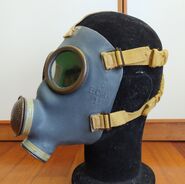 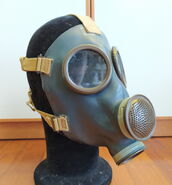 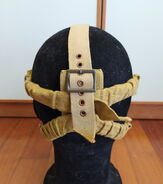 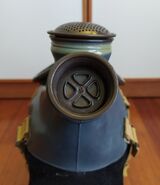 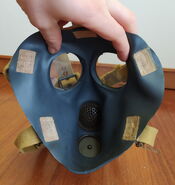 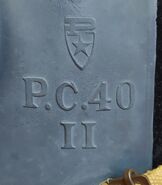 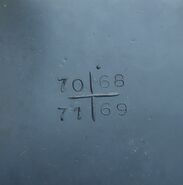 Marking on the inside

Marking on the inside, under the right eyepiece
Add a photo to this gallery 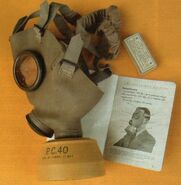 3 Superga PC 40 manuals. These were made in different colours for unknown reasons

Two Superga PC 40s side by side, one on the left made in April 1940 and the other one on the right made in May 1940. There is a slight difference in the quality and softness of the rubber and even in paint colour
Add a photo to this gallery

Pirelli manual for the P.C. 40 Edit

Add a photo to this gallery
Retrieved from "https://gasmaskandrespirator.fandom.com/wiki/P.C._40?oldid=35438"
Community content is available under CC-BY-SA unless otherwise noted.