The P.C. 50 was the last T.35 derived gas mask ever designed. It sports a dedicated integrally-moulded Tissot system.

The faceblank, made of moulded grey rubber, is no different from a T.35 one, with the exception of two integrally-moulded Tissot tubes that run all over from the inlet to the lenses.

It has the following parts attached to it:

The exhale valve allows exhaled air to go outside and prevents poisoned air to get in. It's made of rubber, it opens under the light pressure of exhaling and closes hermetically under the negative pressure produced by the inhalation. It can be easily inspected and possibly replaced by unscrewing the lid of its housing.

The elastic harness has the goal to keep the mask tightly onto the face. It is composed of 5 rubber straps (two of which can have a hook system on late variants).

Although most of the time redundant, anti-fogging disks are kept tightly onto the lenses by the studs around the inside of the rubber section that houses the lenses. 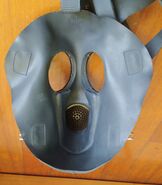 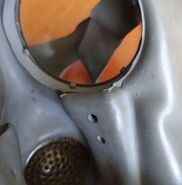 Detail of the Tissot tubes 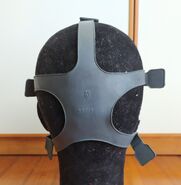 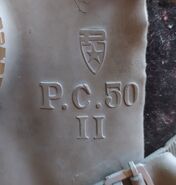 The P.C. 50 was produced in two variants, which had some differences. In earlier samples, the lower straps were attached to the facepiece much like the other 3 straps, the top strap was made rigid and the inlet had only one stud across the central hole. The late variant sported a hook system for easier donning, the top strap was elastic like the others, the inlet had a cross stud over the central hole, much like the later M59, and there was a "Made in Italy marking" on the side. 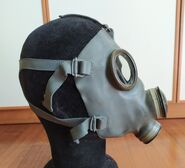 Early production P.C. 50, note that the straps are all attached directly to the facepiece 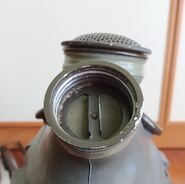 Inlet with a single stud going across it 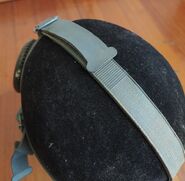 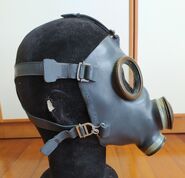 Late production P.C. 50, note that the lower straps are hooked 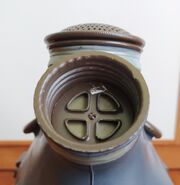 Inlet with a cross stud

"Made in Italy" marking on the side of a late P.C. 50
Add a photo to this gallery

The filter and kit the P.C. 50 originally came with are unknown. Most samples have been found with P.C. 40 or T.35 filters and a T.35 bag, meaning they were either used for training, used by territorial corps or simply mixed in storage with all sorts of equipment.

Retrieved from "https://gasmaskandrespirator.fandom.com/wiki/P.C._50?oldid=37904"
Community content is available under CC-BY-SA unless otherwise noted.