Gas Mask and Respirator Wiki
Register
Don't have an account?
Sign In
Advertisement
in: 30mm, DIN 3182, Italy,
and 6 more

The P43 is an Italian industrial and civilian gas mask. It's characterized by its unique double exhale valve system. It was produced in many different variants and it was exported to many countries.

The P43 was produced in various ways with different furniture but always with the same setup, which consisted of:

P43 with hose and Tubin filter 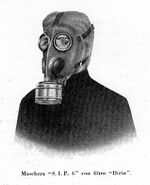 The first types of P43 produced were made solely for industrial purposes. Its faceblank was made of a single layer of green rubber smooth on the inside and textured on the outside (the earliest production might have had only smooth rubber), the old-pattern 5-straps head-harness was attached. The lenses could be made of either Triplex glass or regular glass, depending on the buyer's preference. The exhale valves were of the VD 25 type, the same ones used with Pr.C. 33 masks later on. The thread of the filter was 30 mm. The eyepieces were smaller than in later models, 50mm compared to 60mm.

Note that due to the almost total resemblance to the P.C. 30, it's almost impossible telling them apart in a picture, save for context. 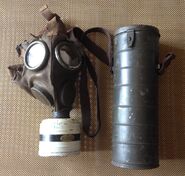 Top of the carrier

Two people wearing chemical suits and old-pattern P43 masks to protect themselves against blister agents. The masks may be P.C. 30s, too

Various operators with antigas equipment, including two D.T.24 apparatuses and a number of early-pattern industrial P43s. The masks may be P.C. 30s, too. Picture taken from a Japanese 1934 book.

Later industrial P43 masks were made with a new and improved setup. The faceblank was made with a layer of rubber, smooth on the inside and textured on the outside; the lenses were made of triplex glass and were larger than before (66mm instead of 50mm, though there's a picture of one that still has the smaller lenses), the head-harness was updated from the previous model and the exhale valves were different, more similar to the ones later used with the T.33 but without 4 corners. Updated industrial P43s can be easily told apart from civilian ones because of the size marking on the left cheek, which has no other marking.

Updated industrial P43 with a Dirin filter and a carrier

Left side. note the marking

Another updated industrial P43. This one might have been used for civil protection

Women running with Pirelli respirators. A couple of updated pattern P43 can be seen, alongside a T.33 on the right and various hosed Pirelli masks (unidentified, probably E or EM)

Civilian P43 masks were issued with a civilian or territorial filter (usually Dirzepo or Pir. 35 filters on later kits), a tube carrier, anti-fogging soap and a spare exhale valve in a small box. These variants all used the updated industrial facepiece setup, with minor differences such as the paint, the markings, the exhale valves and their covers.

On the 26th of May 1934 the P43 was the 2nd gas mask approved by the S.C.M. (Servizio Chimico Militare, chemical military service) and started getting sold to civilians and territorial forces. See their manual here.

After the end of the war, some were repurposed and retailed as industrial masks.

This variant had exhale valves that were dissimilar to most Italian mask, yet they are compatible with T.33-style exhale valves. 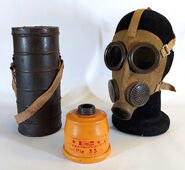 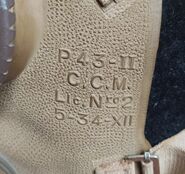 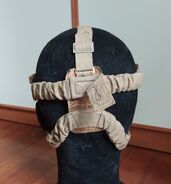 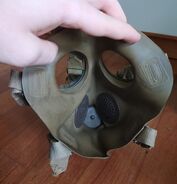 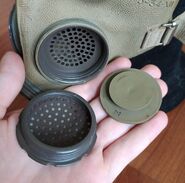 This variant had identical exhale valve covers but different exhale valves, which were the same later used for the T.33.

Close view of the marking and one exhale valve cover

The P43, due to its double exhale valve arrangement, was especially suitable for the addition of a microphone, which would be usually put in place of the right exhale valve. This procedure could be done to any P43, but later on a dedicated type would emerge.

As mentioned previously, any P43 mask could be converted into a telephonist's kit. In particular, the Italian civilian types that were issued with a microphone also featured a paper describing its use. The microphone could be of various types, the most common featured a star on its bakelite cover and could interface with Siemens-type and Western-type telephones.

Detail of the microphone on a P43 in bad conditions

Paper describing the use of the P43 for telephonists

On the 27 of July 1939, the Mod.P43tf. was approved as the 29th gas mask approved by the S.C.M. (Servizio Chimico Militare, chemical military service) as a dedicated telephonist's mask. The mask was issued with a bag, a filter, a manual and a microphone, already installed in place of the right exhale assembly. The facepiece differed from earlier civilian types only by the markings and the top strap's locking system, changed to the more traditional buckle system used on military masks. 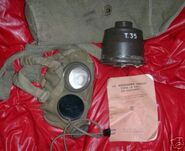 Mod.P43tf. with the full telephonist kit

Detail of the hook on the carrier

Detail of the microphone

A sample in bad conditions

The P44 was a cheaper variant of early P43s, it differed only in the lack of the rightmost exhale valve

The P45 was an even cheaper variant of the P44, as the strap system was replaced with a 2-straps head harness system helped by two strings tied together around the neck.

The P.C. 30 was the civilian variant of early industrial P43 masks. It had a 30 mm thread and smooth rubber.

The P 531 was an improved variant of the early P43, with a Tissot system, along with other improvements.

Some P43s had hoods permanently attached at the factory (along with other minor changes) and were designated as S.I.P. 6.

The SAB P43-like series were variants of the P43 and P 531 produced by SAB for mainly industrial use. 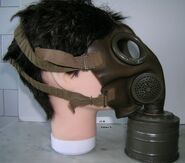 The P43 is confirmed to have been exported by Pirelli all over Europe and South America, with the Netherlands having the best reports of it being used. In Asia, the KMT adopted a dedicated P43 variant. Some masks might have been sold in Africa too, but it's not been confirmed. Some of Pirelli's production was on location, such as in Spain, Argentina and others.

1939, P43 gas masks being used in the Netherlands during a training

A S.I.P. 6 with a Pirelli 1933 Type "A" chemical suit being trialled in the Netherlands

An early-pattern industrial P43 being used with a telephone, Argentina, 1936

Hungary, A P43 with a Dirzepest filter and a telephonist's kit 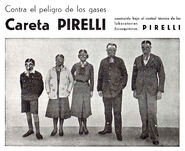 P43 in different sizes from a Spanish Pirelli ad

Various gas masks being tested in Japan. An early P43 can be seen on the far left

The Italian type, also known as Italian mask or Italian imported mask, is a military version of early-pattern P43s, produced and exported to China by Pirelli. 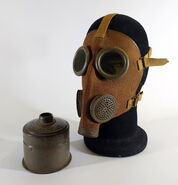 The Ajax F1 was an Italian-licensed french-produced copy of the P43. It used a dedicated 42 mm filter. Save for its intake thread, it's identical to the updated industrial P43 variant. 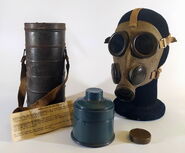 During the early '30s, before the AG 5 and AG 10, L'Anti-Gaz produced two types of P43 variants, most likely for the civilian market or to appeal to the civil defence. The 25mm thread was not being used yet, and the carriers were rebranded Pirelli ones.

This variant of the early L'Anti-Gaz P43 sports a 30mm thread, VD 25 exhale valves (double disc exhale valves on later samples) and small eyepieces (50mm), resembling the first pattern of industrial P43s. The filter is very similar to an early-pattern industrial Dirin, it may have been made either in Italy or in Belgium.

Close up of the facepiece's exhale valves and thread

Top of the Belgian P43 carrying box. Note that the tag was applied later, as the carrier was actually made by Pirelli.

This variant is slightly more modern than the 30mm one, as it has a 40mm DIN thread and AG 5-style exhale valves, but the eyepieces are still the small type. The 40mm thread might also mean that it was meant for export to the Netherlands, but there is no source to neither confirm nor deny this possibility. The filter is a slightly newer Dirin 500-pattern filter and, like the other one, it may have been made either in Italy or in Belgium.

The mask from the front 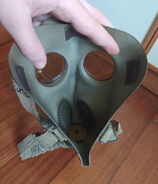 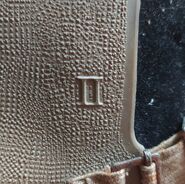 Marking on the outside 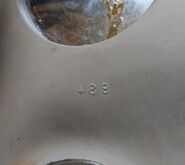 Marking on the inside 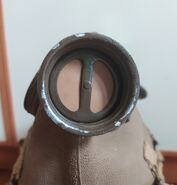 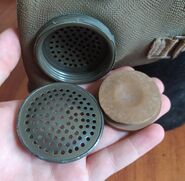 Disassembled exhale assembly. Note the exhale valve, identical to those that would later be used with the AG 5 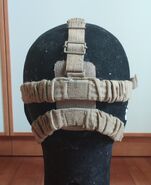 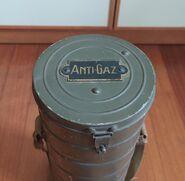 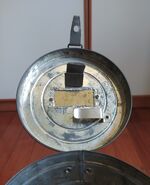 From the inside the "Pirelli" text is still in part visible 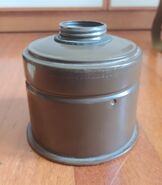 The AG 5 and AG 10 were the finalized variants of the Belgian P43s made by L'Anti-Gaz. They sported a 25mm thread. 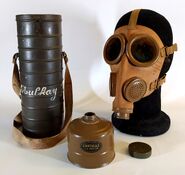 Manual for the Italian civilian types.

Links to all the sources for the information, including most links to the pictures