The PDE-1 is another Eastern European clone of the US M17. It bears a strong resemblance to the Czech M10.

There are some differences between the two, the PDE-1 features a five-point rubber head harness, with just one strap on the top. As seen on the CM-4 (or Bulgarian PG-1) mask(s). The rubber straps are also numbered, similar to that on the straps for the PMK-1 series of masks. Its key difference is a peripheral seal. it's also worth noting that this is the only M17 derivative that ever featured a peripheral seal.

However, it seems that the PDE-1 never had an updated variant that featured a drinking tube. The mask itself is made of black rubber, possibly latex or butyl. The mask features a dark blue voice diaphragm and sometimes has the same dark blue or matte black frames for the eye lenses (this appears to vary on the masks). As mentioned above, this mask is nearly identical to the M10, meaning its filters and inlet valves are entirely interchangeable with one another, which leads to speculation that the mask might have been made in collaboration between Czechoslovakia and Bulgaria.

The mask comes with a brown canvas haversack with green straps, which stores the mask itself, filters, anti-fog stick, and the outserts. The outserts are stored in a green elastic cover, almost similar to that of a Soviet filter sock. It's there to protect the outserts from becoming scratched during storage or when a new pair was issued to a soldier. The frame for the outserts also has the same aforementioned deep blue colour.

The PDE-1's filter elements, virtually identical to the set used in the M10/M10M mask.

The deep blue coloured frame on one of the outserts. 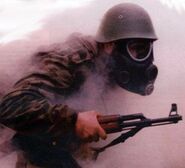 A Bulgarian soldier with a PDE-1 during an NBC training exercise.
Add a photo to this gallery
Retrieved from "https://gasmaskandrespirator.fandom.com/wiki/PDE-1?oldid=40944"
Community content is available under CC-BY-SA unless otherwise noted.