The PMG (Russian: Противогаз Малогабаритный — "Small mask") was designed in the Soviet Union during the Cold War. From 1963 to the late 1960s the PMG kit was first issued to officers, paratroops and artillery crew. Later the kit was slowly phasing the RSh-4 kit out of service but never completely phased it out, as it was still standard issue in 1992. In the 1970s Bulgaria and Hungary started production of the mask, the 70M is its Hungarian copy.

The mask has two flat circular glass eyepieces, which can fit anti-fog inserts, to aid in the use of optical equipment. There is a speech diaphragm located under a removable cover on the front of the mask, and a doubled exhalation valve located towards the bottom of the mask, under the diaphragm. The mask takes a GOST-compliant filter to the side, in a thread unusually made from rubber. The PMG has a strap at the back of the mask, its purpose being to allow a better seal, but the mask is secure on the head without its use being employed. The holes on the helmet part of the mask were made for ventilation of the head so the chances of a wearer overheating would be greatly reduced.

The EO-18k filters come in a olive coloured cylindrical aluminium alloy canister with the same coloured or unpainted cap.

Components of the PMG kit[]

Also called as PMG, it differs from the Soviet PMG only on the membrane cover which is nearly the same as the 70M. It is still in main service.

The Hungarian licensed version differs slightly from the Soviet mask by featuring a higher number of smaller holes in the voice diaphragm, has Hungarian markings and made of a cheaper worse quality rubber. The glass eyepieces are one layered on the 70M while the ShMG has double-layered ones. Hungary also used left-handed ShMG facepieces with 70M membrane covers. 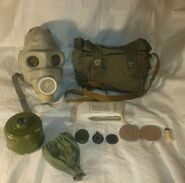 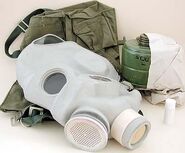