The PRV-BE is a gas mask that's used by Russian missile troops. It is made with both round and triangular eyepieces. It has a modern Russian voice diaphragm. The mask with the triangular eyepieces seems to be a direct copy of the Shm-2012. The masks come with a sleeve to protect the hose, just like the PRV-U. The mask comes with a grey or green bag to hold the KRV-BE coffee can filter. The filter is specially made to filter out amyl and heptyl, two chemicals that come off missiles. The mask comes in 3 sizes and is also for sale for industrial purposes. 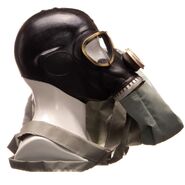 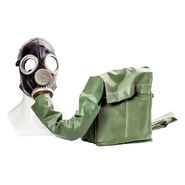 Version with round eyepieces. 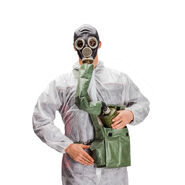 EHMZ exhibit, where you can see the PRV-BE and the P-2U, along with some other masks
Add a photo to this gallery

Retrieved from "https://gasmaskandrespirator.fandom.com/wiki/PRV-BE?oldid=43566"
Community content is available under CC-BY-SA unless otherwise noted.