The Penna mask's faceblank was made of a two layers rubber, green and textured on the outside while beige and smooth on the inside. Inside the mask there was an internal divider made of rubber and synthetic sponge, which separated the faceblank in two parts, reducing dead space and helping to prevent fogging while wearing the mask. The faceblank had the following parts attached: 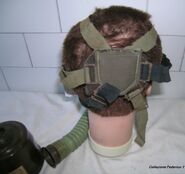 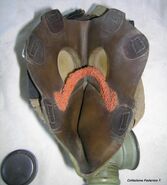 Penna's inside (it's slightly bent)
Add a photo to this gallery 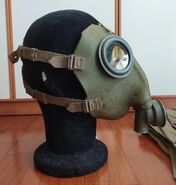 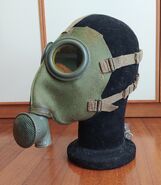 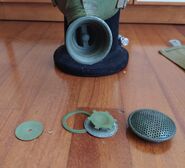 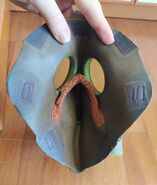 Penna mask's inside. Note the cut pieces that used to be attached to the 6-points head harness 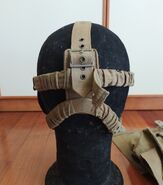 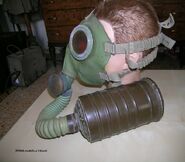 The original Penna mask was provided with a large box filter coloured green. This filter is often referred to as "Piatto", which means flat, as it's the only Italian military filter to not be round. During later use and especially after 1933, the mask was connected to an M.33 filter or more rarely an M.31 filter. 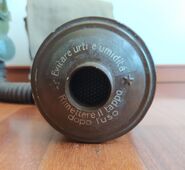 M33 filter from the top 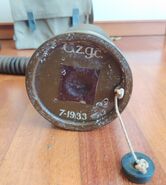 M33 filter from the bottom 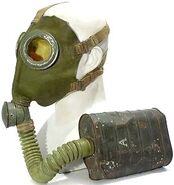 An original Penna filter attached to an M31

Original Penna filter
Add a photo to this gallery

The mask came in a satchel made usually of green (rarely brown) rubberized cloth: it had two sections, one for the mask and the other for the filter and hose. The filter section had holes to allow airflow. Inside the side pocket, there were a pair of anti-fogging lenses, specifically made for this mask. The main strap had a special buckle to be shortened when the mask was in use; the small string on the side of the satchel helped to keep the aforementioned firmly onto the wearer's chest. Some kits had the satchel replaced with an M.31 one, in case the first broke. 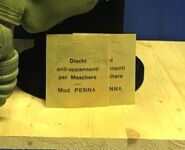 A modified Penna with the flat filter

Penna satchel from the bottom

Penna satchel from the inside

Marking on the original bag
Add a photo to this gallery

During the late '20s, the Italian Army was seeking renovation in its chemical protection equipment. Since the end of the war, in fact, the Army was still using Small Box Respirators, which were considered outdated by every standard after the second half of the '20s. Because of that push, the army adopted the Penna respirator in 1928, naming it after the deceased general Lorenzo Penna. It resembled the SBR functionally but had a very different construction. This mask was made integrally of rubber, which was something quite uncommon at the time, it had Triplex glasses and an internal divider, a feature that was almost unseen in military masks at the time.

Even though this mask had very innovative features, it had some problems in its design, which are in order of decreasing severity:

Because of these reasons, the Army adopted the M.31 in 1931, which fixed these problems and others too. The Penna, therefore, started slowly being ruled out of service.

In 1933 the Penna respirators were upgraded with a new 5-points elastic head harness, which would become standard in Italian military masks. To switch to the new set-up, the masks were deprived of the old harness by ungluing the 4 lower straps and by cutting the rubber where the two upper straps were held. This process was executed to almost all masks, making Penna respirators with the original setup extremely rare. The main use to the newly upgraded Penna respirators was to train soldiers in the use of gas masks, and they were issued with their old bag and an M.33 filter. On rare cases, Penna masks were used for second-line duties, like terrestrial navy units, and in even rarer cases they were used by Italian soldiers or native rebels during the Spanish civil war. 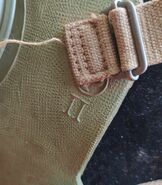 On this sample, the temple straps was placed over the marking 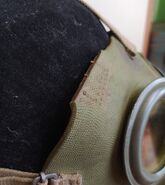 Remains of one top strap 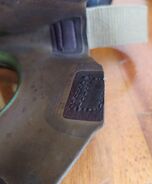 Same remain, but from the inside
Add a photo to this gallery

Soldiers showing captured Italian gas masks during the Spanish civil war. The first gas mask on the right is a Penna with an M33 kit

Gas masks shown in a Spanish newspaper in 1937. The first mask on the left is a Penna with an M33 filter

Penna being used with a chemical suit

Soldiers training with M30 chemical suits and a Penna masks to protect themselves against blister agents. Although their setup is serious, their static pose unveils the nature of this picture

Penna respirator being used by athletes for propaganda reason. The diminished airflow didn't help in jumping that obstacle

Penna respirator being used during training. Note the Fiat-Revelli 1914 machinegun, an outdated design used only for the aforementioned purpose

Penna respirator being used during training

Penna mask in a reference book

Penna mask in a reference book

Detail from the monument dedicated to Emanuele Filiberto di Savoia, erected in Torino, 1937. The mask seen is an updated Penna respirator

Penna respirator with an M30 chemical suit. Note the M.31 bag
Add a photo to this gallery

Retrieved from "https://gasmaskandrespirator.fandom.com/wiki/Penna_Respirator?oldid=37535"
Community content is available under CC-BY-SA unless otherwise noted.