The Pr.C.33 was an Italian civilian mask used mostly for propaganda. It's the successor to the T.32, and it's structurally identical.

The VD 25 exhale valve allows exhaled air to go outside and prevents poisoned air to get in. It's made of rubber, it opens under the light pressure of exhaling and closes hermetically under the negative pressure produced by the inhalation. It can be easily inspected and possibly replaced by unscrewing the lid of its housing. In particular, its shape resembles that of the P.C. 30 ones.

The elastic harness has the goal to keep the mask tightly onto the face. It is composed of 5 adjustable straps (a top one, two elastic temple ones and two elastic cheek ones) attached to the facepiece, and they gather into a nape pad. 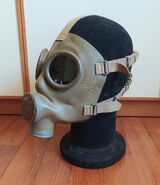 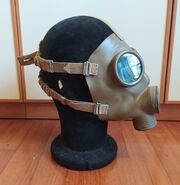 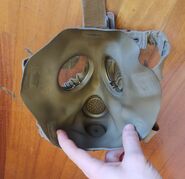 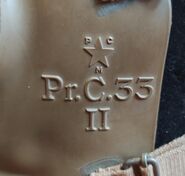 The filter was a small cylinder filled with blocking substances, derived from industrial Dirin filter. 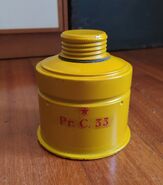 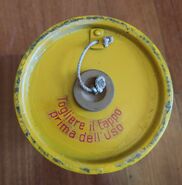 Bottom side
Add a photo to this gallery

The mask came in a metal tube with its filter, an instructional pamphlet and a small box with a spare exhale valve and anti-fogging lenses. 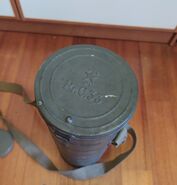 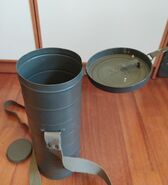 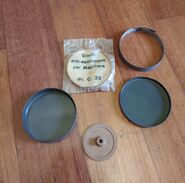 Round box opened, with a spare exhale valve and anti-fogging lenses 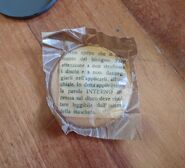 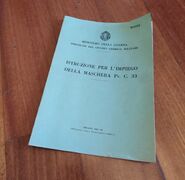 Manual
Add a photo to this gallery

The Pr.C.33 was used mostly for propaganda purposes, being featured in various propaganda shorts from before the T.35 widespread adoption, which quickly fazed out of service the Pr.C. 33. The mask was also used by various civil defence organizations and youth organizations.

Naples, 1935
Add a photo to this gallery

Add a photo to this gallery
Retrieved from "https://gasmaskandrespirator.fandom.com/wiki/Pr.C.33?oldid=38040"
Community content is available under CC-BY-SA unless otherwise noted.