The Prometeo line of half-masks and goggles was designed by Spasciani for the Corpo forestale dello Stato (State Forests' Corps) in case of forest fires.

The Prometeo kit was composed of 4 parts:

The half-mask is made of bright orange and has an ergonomic shape to fit around the oral-nasal area. There's a round section in the front that allows a filter to be wedged in. The mask is worn using a single strap connected through two buckles.

The cartridge is a metal cylinder with a multitude of holes on both faces, and it's designed to filter particles and smoke. It's inserted in the front part of the facepiece and kept still by rubber tension.

The goggles are made of orange rubber and designed after earlier '30s-'40s era goggles, with removable round glasses and anti-fogging lenses.

The satchel was a simple green pouch that would have been kept on the belt.

Inside of the goggles (late variant)

Inside of the half-mask (late variant)

Back of the satchel

Goggle's marking
Add a photo to this gallery

The earlier one, made in the early '80s, used black rubber straps for both the mask and the goggles. The cartridge was made of aluminium and had same-sized holes on both sides.

The later variant, made in the late '80s, used orange rubber for both straps. The cartridge was slightly smaller, in the sense that the round faces were slightly closer, meaning that there was a bit more leftover space in the filter's housing. It was made with brass and had larger holes on the side facing the face. 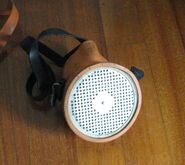 Inside of early variant half-mask

Early variant's marking from a 1982 sample

Late variant's marking from a 1987 sample
Add a photo to this gallery
Retrieved from "https://gasmaskandrespirator.fandom.com/wiki/Prometeo?oldid=32005"
Community content is available under CC-BY-SA unless otherwise noted.