The RSh-4 was a soviet gas mask kit, the successor of the BN kit. It was put in service in 1958 and remained in use until the collapse of the Soviet Union and even sees use with Russia but it was mainly phased out by the PMG kit in the 70s. The RSh-4 (РШ-4 Развернутая шихта тип) means Expanded Filter type 4 (this was because of the filter’s design). 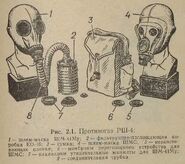 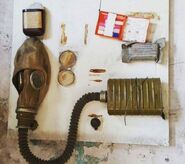 The ShM-41mu (see article for ShM-41) is an upgrade from ShM-41m, it features thicker valve assembly and a ridge around it.

SHM-41mu valve assembly, you can see the depression probably made against physical damage

Yaroslav 1963 Factory machine number that made the rubber - 080 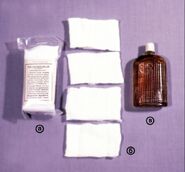 IPP-51
Add a photo to this gallery

Type A bag is a cheaply made Soviet gas mask bag, as usual, it comes with a waist strap, a side pocket for IPP-8/IPP-51. Inside of the bag you have two main compartments, for the mask, the filter compartment which features two wooden sticks on the bottom to keep a good airflow for the filter and a special string to pull so it tightens up the compartment of the filter so it doesn't jump around. It also has a compartment for the hose and a small inner pocket for antifog inserts and membranes.

Filter designated EO-16 is a big dimensions filter that is obviously used with hoses, it has a 40mm port on the bottom to attach PAF filter which is for added particle protection.dimensions of the EO-16 17.5 × 10.7 cm. The filter, of course, features typical bumps/rings for protection against physical damage. The rubber plug like on most of the other Soviet big dimension filters have a small rope attached to the plug so it won't get lost. Filter DP-1 is a Carbon monoxide filter (hopcalite is present in the filter which is a mixture of copper and manganese oxides and is a catalyst to converting CO to CO2 all this when exposed to oxygen) filter has a marking which is a number like 757 (always in 700s) which tells the user how many grams of hopcalite are in the filter.

RSH-4 with DP-1
Add a photo to this gallery

EO-16 Filter(please don't mind the green particle filter, its not meant to go with this filter)

Retrieved from "https://gasmaskandrespirator.fandom.com/wiki/RSh-4_(kit)?oldid=33621"
Community content is available under CC-BY-SA unless otherwise noted.