The S.I.P. 3 is a panoramic and helmet-style mask. It was created for civilian and industrial use.

The connection between the hood and the visor sported a peripheral seal, made either of sponge or rubber, depending on the variant.

The inlet-outlet piece sported an exhale valve in a housing in the front, which could be opened and inspected. The inlet valve was placed over the thread, which could be either 30mm or 40mm. The inlet sports a gasket, allowing the use of filters that don't have gaskets on them, an unusual feature that is redundant in most cases. 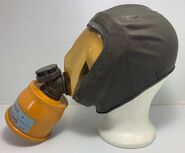 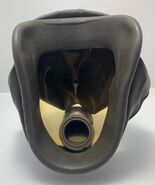 Gasket
Add a photo to this gallery

The first variant of the S.I.P. 3 was made of white rubber, had a sponge peripheral seal and used a 30mm thread with a 30mm Dirin filter and an early kit.

30mm S.I.P. 3. Note the assembly, different from the later ones

S.I.P. 3 with white rubber and a 30mm thread represented in a box in a game of snakes and ladders

This variant is essentially identical to the previous one, save for the 40mm thread. This mask could be issued with the early kit or an S.C.M. kit, in which case it'd have an S.C.M. marking on the side. It may have also been used with an industrial kit as a recovery mask after the War. The only samples found of this type of mask have heavily rotted hoods, which tend to look gray or black instead of white due to oxidation (the natural colour can be seen after carefully washing the rubber, but it'll become dark again few minutes after it gets out of the water).

Mothers with infant respirators, the on eon the left is wearing a white 40mm S.I.P. 3, while the one on the right has a S.I.P. 2

A white 40mm S.I.P. 3 with its hood removed due to heavy rotting 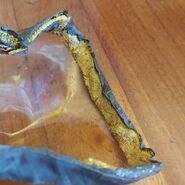 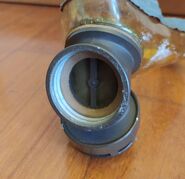 Marking from a heavily damaged sample. There's another S.C.M. marking printed over it vertically 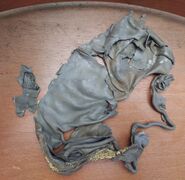 Remains of the white rubber. Note that due to the lower quality of this early rubber, the conditions tend not to be good 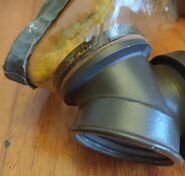 Connection between the inlet-outlet assembly and the visor. Note the gasket in between
Add a photo to this gallery

This variant of the S.I.P. 3 sported black rubber, a rubber peripheral seal instead of a sponge one and a 40mm thread. This variant was issued with an S.C.M. kit and had an S.C.M. marking. Some were repurposed after the War for industrial use.

Inside. Note the peripheral seal 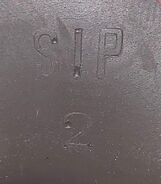 Unusual SIP 2 marking under the peripheral seal, it implies that during production there were multiple shared parts
Add a photo to this gallery

The early kit included a white mask (30mm or 40mm), a Dirin filter (either meant for civilians or industry), a tube carrier and occasionally a manual, a spare exhale valve and anti-fogging soap, depending on the needs of the buyer.

S.I.P. 3 with an industrial filter

This kit, by far the most common, included the following:

Industrial kits can vary a lot, usually, the essentials are a 40mm S.I.P. 3 and the filter, which can be either threat-specific or a recycled one (a Dirzepo or something similar). The rest of the kit is optional.

Unlike other Italian masks in Hungary, the S.I.P 3 saw very limited service. Officially it wasn't even going into service by Légoltalmi Liga (Civil Defence). However, some photos and videos prove that it was indeed used around 1937-38. Just like other Italian masks, all S.I.P 3's were imported by Légoltalmi Kft. (Air defence Co.). Photos made for advertising purposes from the Légoltali Kft. headquarters proves this. The kit with the mask was used in Hungary is rather strange, all photos which were made when the mask was used show 34M filters attached to the mask, however, the advertisement photos show Dirzepest filters. The carrier issued with the mask is unknown but it is very possible that T.35 bags were used with it, like with every other Italian mask in Hungary.

Hungarian Red Cross nurses wearing S.I.P. 3 masks, the man on the right is wearing a 34M in Budapest 1937.

The right Civil Defence worker is wearing a S.I.P. 3, while the left is a 34M. Gas detecting presentation, Hungary.
Add a photo to this gallery

Add a photo to this gallery
Retrieved from "https://gasmaskandrespirator.fandom.com/wiki/S.I.P._3?oldid=43296"
Community content is available under CC-BY-SA unless otherwise noted.