The Avon S10 is the predecessor of the Avon FM12 and was the replacement mask for the S6. The S10 was used as a CBRN protective mask for the British police and military.

Before the respirators introduction into service, trials for the S10 took place in 1982.

The S10 is made of a thick black rubber which is extremely durable and has a 20 year service life from the date stamped on the mask.

The S10 features two voice diaphragms which are located on the front of the mask and on either the left or right hand side of the mask depending on whether the mask was manufactured for left or right handed shooters. A microphone made specifically for the S10 clips onto the secondary voice emitter and interfaces with the Clansman radio system. The lenses on the S10 are almost identical to that of the Canadian C4 in that the "face" of the lenses are flat and a plastic ring keeps the lenses locked in place.

The exhale valve is also located in the middle of the mask and is found in the same assembly as the primary voice diaphragm. The S10 is STANAG 4155-compliant which means the filter thread is the standard 40mm thread diameter and pitch. This means you can use any filter utilizing NATO 40mm threads. The S10 also features a drinking tube that can be adjusted from the outside of the mask; by spinning a flat piece of plastic near the voice diaphragm you move the straw on the inside of the mask from the side to the middle of the mask making it far easier to access the straw while the mask is worn. This system ensures the inner straw isn't in the way of the wearer. The drinking straw is wrapped around the primary voice diaphragm/exhale valve assembly and then inserts into a holder which stops the straw flapping around and getting in the way while the mask is worn.

The S10 has a ridge running around the edge of the mask to form a tighter seal with the hood of the Mk4 NBC smock and its successors.

The S10 mask has a number of accessories available such as tinted black flash lenses (ballistic outserts), a Nomex fire resistant hood, red light enhancing lenses (for use at night), laser rejection filters/lenses (to stop lasers blinding you), a microphone, and a hose. Outserts are the most expensive accessories around, whereas microphones are relatively inexpensive.

The S10 is being replaced by the British MOD (Ministry of Defence) with the more modern General Service Respirator (GSR)  manufactured by Scott Safety. (Currently underway - 2014)

The S10 is currently being used by the Australian Defence Force (ADF) as the ADF-10 as of November of 2017.

The S10 and SF10 are in use by Hong Kong riot police and the Special Duties Unit (SDU) but is slowly being replaced by the MSA Advantage, GSeR, FM12, FM53, C4.

The FM12 is an overall upgrade of the S10 and there are several differences between the S10 and the FM12. Some of those differences include a smaller exhale valve/voice diaphragm assembly on the FM12,  a longer drinking tube on the FM12, and on some FM12s the secondary voice diaphragm can be unscrewed which enables filters to be placed on either the left or right hand side of the mask or to be removed completely to accommodate another filter (two filters are usually used in highly contaminated areas). Although the Avon FM12 was never used by the British military officially, it was (and still is) used by numerous law enforcement agencies and military forces all over the world.

It is worth noting that a mid life redesign that brought in a few modifications were carried out to the S10. The inhale and exhale valves were replaced with a different specification of rubber. A new design was brought in that more effectively held in the place the harness straps

There were several alternative versions of the S-10 Made, each intended for different purposes, with the masks being modified to suit that purpose better than the S-10 in its 'stock' state.

This mask is similar to the S10, but doesn't have a drinking tube, and the S10's brittle plastic lenses are replaced with flat polycarbonate eyepieces. The AR-10 has a second inlet.

Like the AR-10, the drinking tube is absent, and the lenses are flat polycarbonate. The exhale valve cover, lens frames, inlet, blanking plate (instead of secondary speech module) and strap fittings are all grey plastic. Some models have been fitted with a white exhale valve cover, and the head harness is made of thicker rubber than on the S10.[1][2] The mask has been seen in use by staff at the Sellafield nuclear reprocessing facility, in the United Kingdom.

The SF10 is intended for special forces, such as the British SAS. It is identical to the AR10, except the SF10 has a blank plug to block unused port.

The SF-10IM is a very rare variant of the SF-10 which has a microphone built in to the mask in place of the absent drinking tube.

Due to the S10's successful reputation, at least two countries currently developed their own copies of the S10. These include Pakistan and China, however some models have been exported to other countries.

A rather rare export model of the S10, redistributed by KX Defense[3][4], an American company. Its key difference is that the mask was pre-packaged with a six-point elastic head harness, seen on most US military masks, unlike the standard rubber one used on the original. While it was designed for law enforcement agencies within the US, it still retained the drinking tube, overall it's just the standard S10. Meaning it is compatible with most, if not all of its accessories.[5]

A licensed and direct clone of the Avon S10, in service with the Pakistani Armed Forces. The PAK-10 is noticeably cheaper in build quality and materials used, with this being most evident in its weight of 0.3KG compared to the S-10's 0.6KG. The rubber (which might be synthetic) is slightly sticky and is jet black in colour in contrast to the S-10s dark grey. Another difference can be found in oral-nasal cup and how it is shaped and attached, with it clearing being a different design. It isn't known which factories produce the PAK-10 however at least one of the factories has the stamp of "SIL" (can be seen in the photos section). This factory from what can be gathered by translation of Urdu web pages is somewhere in Islamabad.

The PAK-10 Twin is identical to the PAK-10, except for a second inlet with a blanking plug in place of a secondary speech module.

A licensed and direct clone of the SF-10, possibly issued to Pakistani special forces.

A Chinese clone of the S10, similar only in appearance. The MF-22 features a different voice diaphragm and exhale valve assembly, as well as a different exhale valve cover. Currently in service with the Chinese PLA. There is a dual-inlet version designated as MF-22A.

The ADF-10 is a slightly modified variant of the S10 used by the Australian Defence Force untill it was replaced by the Airboss Low Burden Mask. The modifications include the use of the mesh harness and drinking tube from the FM12 respirator.

A closer look on the filter 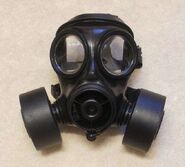 A Typical British S-10 Kit, notice the optical inserts. From the Collection of DukeNougat3d.
Add a photo to this gallery

Retrieved from "https://gasmaskandrespirator.fandom.com/wiki/S10?oldid=38696"
Community content is available under CC-BY-SA unless otherwise noted.