Initial development for the S6 concept began in the early 1950s with two main trials being conducted in parallel. Firstly, studies regarding the fit of the S6 were conducted by Service Units. In order to assess the S6 fit, the respirator was used inside an exposure chamber and a chemical irritant, chloroacetophenone, was used. The CDE (Chemical Defence Establishment) assisted in the planning of these studies and occasionally helped to conduct the studies, although it should be noted that these trials were not under direct CDE control.

The CDE also conducted its own trials on the S6 concept. Between 1954 and 1964, Service volunteers wearing prototype respirators were exposed to biological and chemical substances which included Bacillus globigii (a common soil-borne bacteria, often found on dust particles), CS gas and salt sprays. Other studies consisted of respirators being worn during routine exercises and measuring the ingress of nitrogen into the respirator.

During the developmental stages, three key prototype variants were created. These three were designated the Prototype SR6 1956, Feb 1957 and July 1957. It is unclear what the differences between these models however this is undergoing research by B4D. A little later into the life of the S6, an AFV (vehicle crew) modification kit was developed though it is unclearly how widely this was issued on how it may relate to early models with hoses.

The S6 was not the only respirator in service during the cold war and was issued alongside Light AG Respirators Mk. 6 and 7, the No. 2 Mk. 1 Respirator and even had an optical variant developed around 1972 under the name Optical Sights Respirator No. R8, also known as the S8.

It was 1957, when a study by the Army operational research group of the Department of the Scientific Adviser to the Army Council was concluded with the recommendation that the S6 concept should be adopted.

The S6 respirator was first issued to the British army in 1966 and served as the standard respirator for infantry (aircrewmen and MoD firemen were issued other respirators). It should be noted that the S6 did not begin to fully replace the later marks of LAG already in service until roughly 1969/1970 (evidence for LAG usage during the early stages of the NI conflict can be found here[1]).

Official documentation describes 3 major differences between the S6 platform and the older LAGRs:

The S6 faceblank is often thought to be made of butyl (synthetic) rubber, however an MoD brochure titled 'Chemical Defence Equipment' (c.1970s) claims the S6 is made of natural rubber (see photo in gallery). The S6 faceblank, much like the Light respirator, appeared in 3 sizes: Large, Normal and Small. The size is indicated by a raised letter L, N or S on the cheek of the respirator. An additional size stamp can be found on the inside of the air-guide. A date stamp can also be found on or around the other cheek of the respirator.

A 4th, less common 'Extra-Small' size respirator was also manufactured. These examples have 'ES' stamped into them. Only right-handed facepieces were produced in Extra Small.

Left-handed S6s were also produced for left-handed shooters, these examples will have the intake assembly on the right-hand side and will be stamped 'LH' underneath the size stamp.

The outlet valve/speech transmitter assembly of the S6 is, at least partially, derived from older LAGR components. See here for details.

As previously mentioned, the S6 platform differs from older masks in that it utilises an air-cushion to achieve an air-tight seal. The air inside the cushion is maintained at normal atmospheric pressure by the Equalizing Pressure valve (also known as the air-cushion valve). This valve consists of a rubber tube that feeds into the air-cushion, with the tubing topped by a non-magnetic metal screw-cap. The Equalizing Pressure valve is found behind the chin-cup portion of the air-cushion. The procedure for usage will be described in this article later.

In order to offset clouding of the lenses via exhalation, the S6 design employs an oral-nasal cup (known in manuals as the air-guide). The oral-nasal cup features an inlet hole in the top to allow air to pass over the lenses. It should be noted that the oral-nasal cup is not internally moulded to the facepiece. One can pull the air-cushion back to reveal the method of attachment. The cup is attached via a rubber pin that is reinforced with a split washer which stops the rubber pin from detaching. There are two pin-washer assemblies - one on both sides of the oral-nasal cup.

The S6 also included a method of attaching spectacles for soldiers with visual issues. Centrally, above the eyepiece assemblies, sit 4 pairs of holes upon a raised plane to which anti-gas spectacles can be attached. The differing height of the holes allow the user to adjust the height of their spectacles as necessary.

Pamphlet No.3 Nuclear, Biological and Chemical Defence Equipment (1966) details the procedure by which a soldier uses the respirator under NBC threat. Pamphlet No.3 does not differenciate between the Light respirator and the S6, thus it has been assumed the drill was the same for both masks.

Once on, respirators are not be removed except upon orders to do so by the local commander. The executive order for removing respirators is GAS CLEAR. On this order:

As per Pamphlet No.3, there are no special carriage positions. The haversack was to be worn in a way that allowed for protection to be gained in the shortest time possible. The position of haversacks depended on:

The S6 was issued in the 58 pattern haversack originally (1966 - c.1972) before being replaced by the Mk II haversack. The original 58 pattern haversack was made of a canvas cotton blend. This presented a huge decontamination issue - the haversack could potentially soak up chemicals and the small cotton fibres were thought to be capable of trapping deposits of deployed NBC weapons.

Although obsoleted by the mid 1970s, the 58 pattern haversack remained in service with various police forces, with the Royal Ulster Constabulary supposedly using them up until the 1990s (see here).

The Mk 2 haversack was made of nylon coated in polyurethane which was thought to make decontamination much easier. A variation of this featuring an orange seam around the haversack flap was issued in the latter days of the S6 and also saw service with the S10. Left-handed S6s had their own haversack known as 'Mk 2A' as opposed to the regular Mk 2 haversack in usage with right-handed respirators.

The S6 respirator was equipped with several different canisters (see above infobox), but the two most commonplace canisters encountered are the No.1 Mk. 1 and the No 2 Mk. 1. Both canisters follow an archetypal construction of resin-wool and activated charcoal (the canister contained less than 100g of charcoal). One can differentiate between No. 1 Mk 1 and No. 2 Mk 1 by inspection of the canister bottom. The No. 1 has a large central intake, whereas the No. 2 has a series of slits arranged circularly, around the edge of the canister body. It has been suggested that the body of the canisters was changed due to the singular central intake on the No. 1 being susceptible to clogging.

Information regarding the S6 canisters' protective ability in the context of genuine NBC threats remains unknown, such information would not likely ever be disseminated for obvious reasons. J. Chisholm states: No studies ​ involving the use of chemical or biological warfare agents were conducted to assess the protection afforded by the S6 respirator.

However, a non-military study was published by Hawkins in 1973. This study examined the usage of 4 different canisters against 3 different anaesthetic gases. The 4 canisters in question were: 'Siebe-Gorman Puretha Type 'O', 'The Waters Canister', 'Auer 2703A' and 'The military S6 canister'.

In Hawkins' study, compressed air containing 1% anaesthetic vapour (either Halothane, Trichloroethylene or Methoxyflurane) was passed through the canisters at a rate of 8L/minute. The time for 0.1% of vapour to be detected on the canisters' distal side was recorded. After this, the activated charcoal in the canisters were regenerated with heat, and the study repeated. 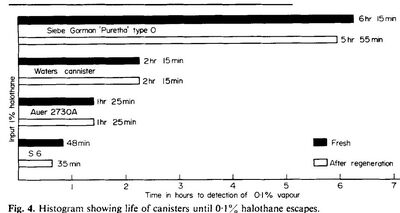 The S6 canister performed the worst of the 4 canisters across all 3 anaesthetic gases, with Hawkins concluding: It does not provide a useful endurance, even when fresh, and loses approximately one-third of that time upon regeneration.

Survive to Fight lists 7 occasions when the filter should be changed:

Enquiries page for S6 and other equipment

Retrieved from "https://gasmaskandrespirator.fandom.com/wiki/S6?oldid=44447"
Community content is available under CC-BY-SA unless otherwise noted.