Initial development for the S6 concept began in the early 1950s with two main trials being conducted in parallel. Firstly, studies regarding the fit of the S6 were conducted by Service Units. In order to assess the S6 fit, the respirator was used inside an exposure chamber and a chemical irritant, chloroacetophenone, was used. The CDE (Chemical Defence Establishment) assisted in the planning of these studies and occasionally helped to conduct the studies, although it should be noted that these trials were not under direct CDE control.

The CDE also conducted its own trials on the S6 concept. Between 1954 and 1964, Service volunteers wearing prototype respirators were exposed to biological and chemical substances which included Bacillus globigii (a common soil-borne bacteria, often found on dust particles), CS gas and salt sprays. Other studies consisted of respirators being worn during routine exercises and measuring the ingress of nitrogen into the respirator.

During the developmental stages, three key prototype variants were created. These three were designated the Prototype SR6 1956, Feb 1957 and July 1957. It is unclear what the differences between these models however this is undergoing research by B4D. A little later into the life of the S6, an AFV (vehicle crew) modification kit was developed though it is unclearly how widely this was issued on how it may relate to early models with hoses.

The S6 was not the only respirator in service during the cold war and was issued alongside Light AG Respirators Mk. 6 and 7, the No. 2 Mk. 1 Respirator and even had an optical variant developed around 1972 under the name Optical Sights Respirator No. R8, also known as the S8.

It was 1957, when a study by the Army operational research group of the Department of the Scientific Adviser to the Army Council was concluded with the recommendation that the S6 concept should be adopted.

The features of the S6 include the very innovative inflatable air seal around the inside of the facepiece. It also had an early design of an oral-nasal cup that was built into the mould of the mask, not a separate piece extending from the interior of the facepiece to cover the nose and mouth. It features a six-point semi-elastic head harness with easily adjustable metal buckles, the four on the side suspended in position by retention clips which can be undone.

The mask provides an excellent field of vision using larger eyepieces in the shape of half-rounded rectangles.

Additionally, the S6 is made of soft black butyl rubber. The mask uses a side-mounted filter to the left of the mask, making it much easier and more natural to shoulder a firearm for right-handed soldiers. A left-handed variant of the S6 was also used, with the canister mount attached to the right-hand side of the mask. These particular models also have 'LH' (left-handed) imprinted on their rubber.

It was very much liked by the British military for its comfort and very low breathing resistance.

Sometime around 1966, a prototype 'Extra-small' size was tested marked "ES".

The S6 was issued in the 58 pattern haversack originally (1966 - c.1972) before being replaced by the Mk II haversack. The original 58 pattern haversack was made of a canvas cotton blend. This presented a huge decontamination issue - the haversack could potentially soak up chemicals and the small cotton fibres were thought to be capable of trapping deposits of deployed NBC weapons. The Mk II haversack was made of nylon coated in polyurethane which was thought to make decontamination much easier. A variation of this featuring an orange seam around the haversack flap was issued in the latter days of the S6 and also saw service with the S10.

The S6 respirator was equipped with several different canisters (see above infobox), but the two most commonplace canisters encountered are the No.1 Mk. 1 and the No 2 Mk. 1. Both canisters follow an archetypal construction of resin-wool and activated charcoal. One can differentiate between No. 1 Mk 1 and No. 2 Mk 1 by inspection of the canister bottom. The No. 1 has a large central intake, whereas the No. 2 has a series of slits arranged circularly, around the edge of the canister body. It has been suggested that the body of the canisters was changed due to the singular central intake on the No. 1 being susceptible to clogging. 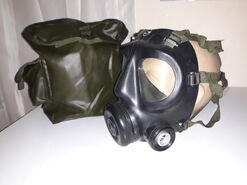 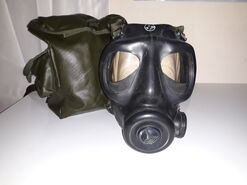 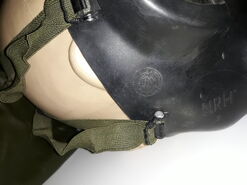 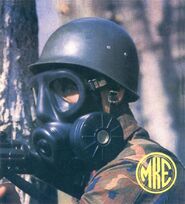 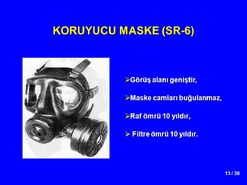 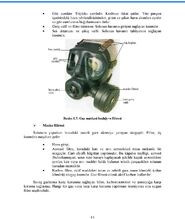 A pdf photo of explanation of SR6
Add a photo to this gallery
Retrieved from "https://gasmaskandrespirator.fandom.com/wiki/S6?oldid=43782"
Community content is available under CC-BY-SA unless otherwise noted.