Gas Mask and Respirator Wiki
Register
Don't have an account?
Sign In
Advertisement
in: Article stubs, Italy, Half Face Masks,
and 2 more

The Serono Trocello was an Italian navy-issued gas mask produced in 1915 by the chemical engeneer Cesare Serono (1871-1952) and his assistant Trocello.

The mask was almost identical to the army model, the "Camician-Pesci" type. It was made with various layers of gauze inside of which there was a layer of cotton that was replaceable. Some sources claim it to be a direct derivative of the Camician-Pesci type, while others claim that it was developed indipendently.

Mask viewed from the side

Inside of the mask

The mask in its bag 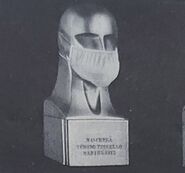 Inside cotton layer
Community content is available under CC-BY-SA unless otherwise noted.
Advertisement