The ShM-1 (Russian: Шлем Маска-1 - "Helmet Mask-1") was a Soviet mask intended for infantry use. The Hood Style dates back to World War I, pioneered as the Zelinsky Kummant, but it was based off of the ShMD-1 children's mask, which was introduced around 1938. It was introduced just before the Second World War, in 1939. The ShMD-1M children's gas mask is based on this mask and the O-11 faceblank is based off of this mask. The mask was chosen instead of the O-11 (similar to the O-8) because the hood layout was easier to use than a normal strap system and required less training for use. After the war, Hungary made a copy of the ShM-1, the 51M.

The facepiece is a helmet styled rubber mask. With two circular eyepieces in metal assemblies and Tissot-tubes system which are not integrated into the mask. The valves housing is made out of metal which is painted usually olive green or grey and has a 40mm GOST thread. There was a variant of the ShM-1 with a aluminium diecast valve similar to the GM30 valve. In 1942 the valve was redesigned to have a different exhale port. The exhale valve is a tulip type, however instead of 3 rubber pieces it has 2. Because of the molded seat which puts it in place in the valve assembly. The ShM-1s valve assembly is glued to the faceblank, however, some ShM-1s had crimped valves. The ones with crimped ones have later post 1942 valves. The mask was made in 4 sizes, from 1939 till the early 1950s. The ShM-1s rubber was either gray, black neoprene, recycled or brown (not to confuse with sunburnt gray ones). On the left or right below the lenses, there is a mold stamp (for example Ф53). On some ShM-1s its on the nape of the mask, like on the 51M. An interesting thing to note is the resemblance to the later GP-5 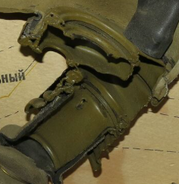 Refurbished ShM-1 from around the 1960s.

The T-Ch was introduced in 1935, originally used with the O-8 and Sh-1 in the BN T-Ch kit. Early T-Ch's had an inlet valve at the top intake. Later ones are missing this inlet valve. But later was used with the ShM-1 in the BN T-Ch kit. The T-Ch saw use till at least 1943. Some T-Ch's were produced at the LMZ factory (Ленинградский Металлический Завод - Leningrad Metal Plant). T-Ch's frequently have air tight check stamps on them, filters were checked for air tightness until 1945.

The MT-4 was introduced in 1939 together with the ShM-1, in the BN MT-4 and BS MT-4 kit. The MT-4 stopped being produced in 1942 or 1943, but saw use at least till 1945. There was also a SR MT-4 made at the same time as the MT-4, the only difference was the markings on the filter. Some MT-4s were produced at the LMZ factory (Ленинградский Металлический Завод - Leningrad Metal Plant). MT-4's frequently have air tight check stamps on them, filters were checked for air tightness until 1945.

The L-3 was introduced in 1939, it was used by tank crews and aircrews in the BS L-3 kit. They stopped being produced around 1944.

The MO-2 was introduced in 1943, it was used with the BS MO-2 kit. The MO-2 stopped being produced somewhere around 1945, however SR MO-2s and KR MO-2s were made until at least 1964. Some MO-2s were produced at the LMZ factory (Ленинградский Металлический Завод - Leningrad Metal Plant). 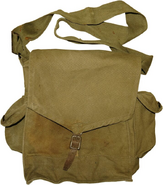 The M1940 bag is made of canvas (like with the later bags, they came in multiple colors). The M1940 has a pocket for the facepiece, then another pocket for the filter. On the inside there is a small pocket for an Anti-fogging stick. The M1940 has two straps, one for around the shoulder and another one for the waist. There are 2 wooden blocks on the bag bottom for keeping the filter up right. The M1941 is identical to the M1940 but has wooden hardware to save materials. 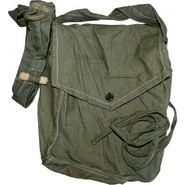 Both the M1936 and M1940 had economy variants, these tend to be of lower quality and don't have some of the pouches (the M1936 economy bags have no gas cape pouch or side pockets). Economy M1928 bags might have been also used with the ShM-1. But no period or kit proof has been found. 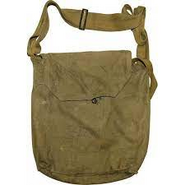 The TD-1 was the first individual decontamination kit used with the Mod O-8 and ShM-1 in the BT T-4 kit and the BN MT-4 kit. It was introduced somewhere in the mid 1930s and discontinued around 1939.

Use of the ball. - Take the ball, squeeze it tightly in a handful, holding over the poisoned part of the skin. Press the center of the ball with your fingertips to push the container inside. If this fails, the container must be pierced from the side with a wedge of metal. Carefully and quickly (2-3 times) wipe the poisoned area with a compressed wet ball, then break the thread with which the ball is sewn to the side, wrap the gauze, remove the remnants of the container and wipe the poisoned spot with the gauze until the gauze dries. Each contaminated site should be treated in 2-3 minutes; if the gauze dries before this time (usually after 1-1/2 minutes), take another ball and apply in the same way. The liquid should not be rubbed into the skin, but only gently and thoroughly, with light movements sweep the contaminated area. Under no circumstances should the eyes be swept with balls; when wiping the skin of the face, make sure that the liquid does not get into the eyes. 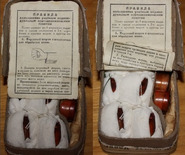 In 1941 the IPP-3 was introduced, it was only made in 1941. There were 2 types of IPP-3s, ZA and VA. Lots of them were dumped by the soldiers, some might have been used as containers for personal items by soldiers. Most of them are found in bad condition, without anything inside. 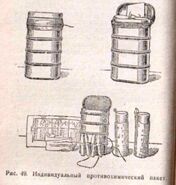 In 1942 to save costs the IPHP-42 was introduced. The IPHP-42 was a simple cardboard box with decontamination materials, it was cheaper to produce then the IPP-3. Its unknown when it was discontinued.

The IPP-5 was a simple tinted glass flask (very similar to the later IPP-8 ), not a lot is known about this decontamination kit. It was likely introduced during the Second World War. Its unknown when it was discontinued.

The IPP-6 was a simple cloth bag with wipes. It might have been introduced in 1942, but that is unconfirmed. Its unknown when it was discontinued. 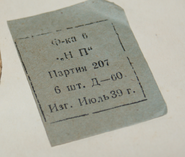 Instructions for the NP Anti-fogging inserts.

Not a lot is known about the hoses, the ShM-1 seemed to use 40mm GOST stockinette covered or rubber hoses. You can tell them apart from later hoses by looking the the female and male thread paint (usually gray or black) and by markings.

The gas cape was a paper sheet impregnated with albumin, it would be worn when gas was being dropped, mainly against blister agents. It could protect against sulphur mustard for 12-14 minutes. This is the hardest to find part of the kit and most BN kits didn't contain a gas cape.

The BS MT-4, BS L-3 and BS MO-2 were the last kits to be issued in the Second World War. They contained:

The MO-4 kit was introduced around 1946. It contained:

The ShM-1 was issued mostly to infantrymen, however, the ShM-1 was used by aircrews and tankers with the BS L-3 kit. The ShM-1 saw use in the Second World War, but many soldiers dumped their masks. Because the mask was excess weight in their eyes. And luckily, soldiers didn't need masks on the eastern front. After the war, the masks were kept in storage. And around the 1960s, a program was launched to refurbish ShM-1s. ShM-1s from this program have replaced lens crimps and a ShM-41m valve assembly and are size 4. There are also refurbished ShM-1s with only new lens crimps and post 1942 ShM-1 valve, these ones are in all sizes and have a different type of stamp.

ShM-1 being inspected by civilians, circa 1940.

Established in 1943 on the territory of the USSR, the first division of the Polish Army was equipped with ShM-1 masks. Official documentation doesn't say anything about ShM-1 being used in Poland after the war, but in some archival videos from the Polish civil defense (TOPL), show the ShM-1 being used alongside the SzM-41, Maska typu cywilnego / Polish GP-4 and ML. Because of the lack of documents about any mask like this in polish archives, it's impossible to say if it was original soviet ShM-1 masks or the Poles copied it. The ShM-1 was used industrially in Poland as well, up until at least the 1960s.

During the war, some ShM-1s were captured by the Germans and sometimes were made into goggles. A similar technique was done to MOD O-8 and GM-30 masks.

German soldier with goggles made out of a ShM-1 on his cap.

Hungary also used the ShM-1, during the war they captured some from the Soviets and added KÁB stamps (Központi Átvételi Bizottság - Central Acceptance Committee). They used the ShM-1 in the trials for the 44M buzogányvető. After the war a 48M was mentioned in numerous documents, there's a chance that it was a Hungarian issued ShM-1.

One of the first test launches with the 44M buzogányvető, using the mask as a protective measure against backfire.