The ShM-41 (Russian: Шлем Маска - "Helmet Mask"), also exported to East Germany as the SchM-41-M, was a Soviet mask intended for infantry use. Similar designs were used throughout the Warsaw pact, and the ShM-41 itself was exported to many Soviet countries.

The mask is a typical Soviet helmet styled rubber mask. With two circular eyepieces that can fit anti-fogging inserts but also has an integrated Tissot tubes system. The valves' housing is made out of metal which is painted dark tan and has a 40mm GOST thread. The mask was made in 5 sizes.

It differs from the ShM-1 mainly on the stronger valve housing, because now it is crimped on not just glued. It has an integrated Tissot tube system and anti-fogging lens insert fixing rings now.

The separated Tissot tubes of the ShM-1 on the left compared to the integrated ones in the ShM-41 on the right.

Valve house of the ShM-41 on the left and the ShM-1 is on the right.

Differs from the previous model on the valve housing which has now double exhale valve to make a better seal. Later around 1958, the valve house was modernized, it got a stronger one made of thicker metal reinforced with geometric shapes (a negative ring indent on the side) and used higher quality less flaky paint.

Cut of the ShM-41m valve house.

Just like the better-known GP-5 the u (Russian: "y") stands for the thinner rubber. This was the only change

East German export variant called Schutzmaske. Germany didn't produce masks so the masks were bought from the Soviet Union. It can be all the 3 previous variants. The most common variant is an export variant from the USSR, the variant has a green valve assembly. The DDR also made a foam face insert for both the ShM-41 and BSS-MO-4U masks used to reduce dead space in the hood.

Übungsschutzmaske, training variant in DDR. Only difference was a training filter.

Export for Syria, Egypt, Iraq and to other mostly Arabian countries. ShM-41mu with black rubber facepiece due to the sunnier and hotter weather (the black rubber is more resistant to UV).

The ShMP (ШМП, Russian: Шлем Маска Промышленный - Helmet Mask Industrial) is a designation for helmet-styled masks used in the industry (mainly ShM-62 and ShM-41 variants). Most of the ShM-41 masks under ShMP designation were military masks but were withdrawn from service. There is a "ШМП" stamp on the outside. 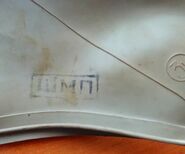 The origin of the Soviet ShM-41 dates back to World War II, where the ShM-1 gas mask was a standard Red Army issue mask. The 'Hood Style' however dates back to World War I, pioneered as the Zelinsky Kummant gas mask. It is the most popular gas mask model in the Soviet military using the hood layout. The mask evolved and its construction held different markings. Several licensed copies of the mask were used in Warsaw Pact countries during the Cold War, including the Polish SzM-41, SzM-41M, SzM-41M KF (the MP6 and the MK-221 and MK-212/1 as well); the Bulgarian BSS-MO-4U; Hungarian 60M (Hungary also imported ShM-41 masks in small numbers as SM-41); the Czechoslovak M52 and M60 and the Romanian MD52, MD58 and P2085. The ShR-1 casualty gas mask is based on it as well.

China also copied the mask and used as Type 59, China made and other copy but with a plastic valve named Type 66. The Chinese TF-1 is also based of the ShM-41m.

The "y" - u - at the end of the size means it is an upgraded version with thinner rubber.

Flat canisters and "coffee can" filters would be hose connected. Including: MO-2, MO-4, EO-12, EO-14, EO-16, industrial Strela Filters and various other filters depending on the user country and organization.

The last Soviet gas mask kit issued to the Red Army during the Second World War. It contained: 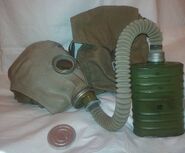 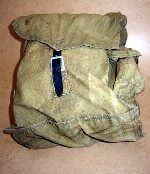 The anti-fogging inserts that would usually come with this mask. NP is one sided while NPN is two sided.

It replaced the MO-4u kit in 1958. It completed with an ShM-41/ShM-41m/ShM-41mu facepieces and EO-16 filter or EO-14 filter. The Type A bag that contains the three main components, hose, filter and facepiece and and a little pocket inside for anti-fogging lenses and side pocket for IPP-51 decontamination kit. It comes with NMU insulating lenses and if the mask is a ShM-41 with the insulating sleeve as well. The RSh-4 kit is also compatible with the ShMS facepiece and the MM-1, all masks produced in the 50s and 60s.

Factory display of the RSh-4 kit.

In East Germany (NVA, Zivilverteidigung, Kampfgruppe) first it was issued with a simple Tragetasche 1 bag (similar to the Soviet Type A bag) in "Blumentarnmuster" camouflage pattern alongside with SchMS, MM-1 and PRWU. Then a simpler bag without camouflage and a waterproof PVC coated bag was issued (all called Tragetasche 1), to scouts the Tragetasche 1T bag in "Strichtarn" pattern was issued.

Notice the green unfinished valve. very similar to the BSS-MO-4U

Rocket refueling kit, compatible with the ShM-41m and ShM-41mu facepieces but the most common was the ShM-41mu because the negative bump on the valve housing makes it easier to fix the hose cover.

Industrial kit. The mask can be either ShM-41, ShM-41m, ShM-41mu or ShMP with a most likely Type A bag, hose and industrial Strela Filters.

The Magyar Néphadsereg (Hungarian People's Army) and Polgári védelem (Civil Defense) used the mask (mostly ShM-41) with a 60M kit instead of the 60M mask sometimes, it was called SM-41. The highest number in military service was approximately 50000, these were imported in 1962.

The industry used the ShMP (mostly ShM-41mu, it was called sisakgázálarc - "helmet mask") in a standard industrial kit containing an industrial bag which was similar to military ones but way cheaper, hose, industrial filter and anti-fogging inserts or soap. It was used with fresh air breathing apparatuses as well. 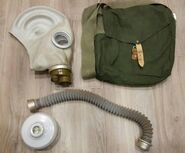 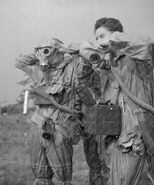 Civil Defence training. The left man donning an SM-41 and the right a 51M.

PAF filter it was attached to EO-16 filters for extra particle filtration. 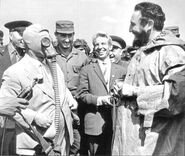 A display showing a ShM-41m cut in half