The Small Box Respirator was a British manufactured mask, designed and entering service in 1916.[1] It was a vast improvement from the PH Hood, as it used a hose and external filter design as opposed to simply treated cloth. The design of the Small Box Respirator is primarily credited to Lieutenant-Colonel E. F. Harrison, who was celebrated as the man who saved the British Army. He later died as a result of testing the gases on himself to ensure the protective efficiency of his designs.[2] Lesser known is that Porton Down's Major John Ambrose Sadd was also involved in the production of these respirators.

The mask was used by many members of the Entente, notably Britain and her empire, Italy, Portugal, and the United States. Its filter was capable of filtering out every German chemical agent used in the war, however, it had shortcomings, including the fact how one could not inhale through the nose due to a noseclamp being present.

The mask has a build that is typical for the time as the faceblank is made of rubberized fabric and the hardware is lacquered metal. The lens frames are, oddly enough, secured to the mask using string. The head harness' straps are made of an elastic material, save for the one that crosses the top of the head which is made of cotton. The straps lack a method of adjustment besides a safety pin that is meant to be used to shorten the length of the top strap. The peripheral seal is made of a massive amount of rubber cement. On the inside of the mask, a mouthpiece - similar to that of a common snorkel - and a gauze-padded nose clamp can be found. The angletube is constructed of 2 painted metal tubes welded together at a 90-degree angle which the hose attaches to. Also present on the angletube is a flutter valve made from orange rubber which would be lacquered onto the mask. Earlier SBRs have a metal flutter valve guard which would eventually be discarded to save on metal. The hose is made of orange rubber wrapped in fabric and is attached to the angletube and filter with wire.

The filter is a small lacquered metal box which contains charcoal, quicklime, and a particle-filtering material. Earlier variants of the mask, however, have a canister that is painted black and American-issued SBRs would sometimes be outfitted with either a Type H or Type J canister. On the bottom of the canister is an inlet valve made of orange rubber.

The mask was issued in a chest-mounted carrier which comes with a can of anti-dimming solution.

The Model E was a modified version of the Small Box Respirator which had its mouthpiece and part of the hose replaced with Dutch-made parts to allow the mask to be connected to a Dutch filter. The mask was issued with a Dutch bag and filter.

Drawing of the mask

After the War, some masks were purchased by private companies and sold as industrial masks. One of those companies is Spasciani.

Repurposed small box respirator ad in a 1932 Spasciani catalogue. The mask could be provided with either an original filter or a Spasciani one 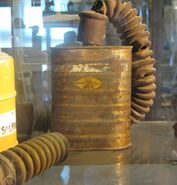