The SzM-41 KF is a Polish industrial gas mask (MUA is a name given to a kit for industrial purposes) which probably started use in 1960's and was used till the late 1980's. It is very similar to the ShM-41M.

Like it's Russian counterpart, the SzM-41M KF was made of rubber with circular eyepieces. The MUA had two variants. The earlier which was produced only between 1968 and 1970, the later which was produced in the 1970s and the late which ran till the end of the production. Both were identical except for the voice emitter. The earlier one featured a metal emitter cover while the later one had black plastic. The black plastic version also had an additional feature inside the mask, a very small funnel-shaped rubber cup. User's mouth was meant to sit in that cup to transmit the voice straight to the voice diaphragm. The late variant has an updated voice emitter made of plastic and metal (there is also a fourth variant only produced in 1968 with a bigger emitter similar to the one on the CM-4). The voice emitter had differed from the Russian emitters because of its size and shape. The facepiece name is SzM-41 KF.

The mask had a 40mm GOST thread that was connected to the filter by a black hose. The filter itself was a green, circular style filter designated EO-14, similar to the Soviet EO-12.

Comes with two paint variants: Light green and Camo wz. 58 "Deszczyk". Meant to be carried on the shoulder but due lack of chest belt availability and high interior, soldiers use to carry it on back. Inside it's divided into three bays for mask's equipment and one outside for field patch.

The MUA is often called Słoń - "elephant" due to the rubber pipe that looks like an elephant's trunk. 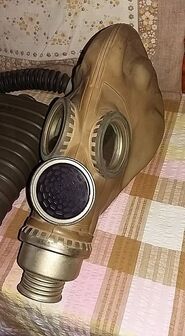 The fourth and rarest variant, most likely made for radio operators. 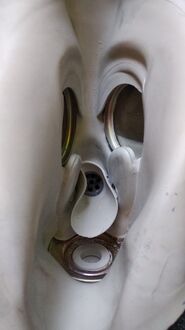 Inside of the oldest version of that mask.
Add a photo to this gallery
Retrieved from "https://gasmaskandrespirator.fandom.com/wiki/SzM-41M_KF?oldid=36706"
Community content is available under CC-BY-SA unless otherwise noted.