Territoriale 32
Territorial 32
Colourized picture of a T.32 from a T.35 manual

The T.32 was an Italian gas mask used during the early 30s' by various non-combatant forces and organizations. This was the first territorial mask for Italy, it was made to fill the gap between the expensive military mask and short-lasting civilian ones.

The VD 25 exhale valve allows exhaled air to go outside and prevents poisoned air to get in. It's made of rubber, it opens under the light pressure of exhaling and closes hermetically under the negative pressure produced by the inhalation. It can be easily inspected and possibly replaced by unscrewing the lid of its housing. In particular, its shape resembles that of the P.C. 30 ones.

The elastic harness has the goal to keep the mask tightly onto the face. It is composed of 5 adjustable straps (a top one, two elastic temple ones and two elastic cheek ones) attached to the facepiece, and they gather into a nape pad. 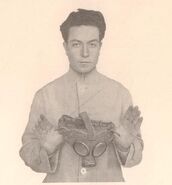 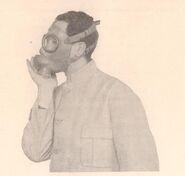 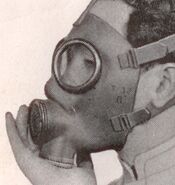 The T.32 came with a dark coloured Dirin filter and possibly a spare exhale valve and either anti-fogging soap or anti-fogging lenses; all of the above were carried using its dedicated carrier.

Carrier for the T.32 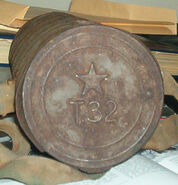 Opened T.32 carrier
Add a photo to this gallery

During the early '30s, there was a need for a gas mask suitable for territorial non-combatant forces, a need that was satisfied with the adoption of the T.32. This mask was cheaper than the military type but sturdier than the civilian mask, making it ideal for this role as a "maschera territoriale" (territorial mask).

The T.32 saw some use, and a year later an exact copy of this mask, the Pr.C.33, was adopted as a propaganda mask. Around 1935, both of these masks were replaced by the T.35, the newer and improved territorial mask. 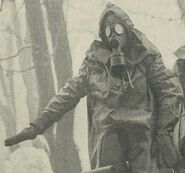 T.32 being used with a chemical suit to protect the user from blister agents

T.32 in use by the fire brigade during a 1933 training session in Rome

T.32 being used by Balillas 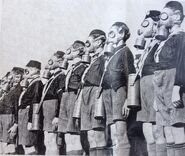 Antigas exercises in Rome, 3 October 1932
Add a photo to this gallery

Instructional pamphlet of the Pr.C.33 Edit

Add a photo to this gallery
Retrieved from "https://gasmaskandrespirator.fandom.com/wiki/T.32?oldid=41642"
Community content is available under CC-BY-SA unless otherwise noted.