The T.33 was an Italian territorial gas mask used by many non-combatant forces, civilians and industries.

The exhale valve allows exhaled air to go outside and prevents poisoned air to get in. It's made of rubber, it opens under the light pressure of exhaling and closes hermetically under the negative pressure produced by the inhalation. It can be easily inspected and possibly replaced by unscrewing the lid of its housing. The exhale valve is slightly different from that of the T.35, as the base rubber circle is slightly larger and therefore not interchangeable with the previously mentioned.

The 5-strap system on this mask varied, with some having a hook system for the two lower straps and some having all the staps attached. 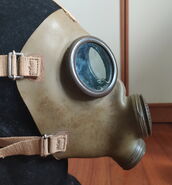 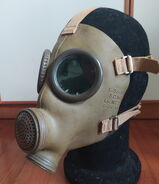 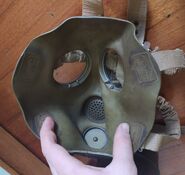 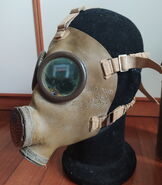 T.33 with hook straps and gear-like exhale cover
Add a photo to this gallery

T.33 masks were produced with various furniture and markings, depending on the time of production.

Initially, the T.33 was used only in industries and by territorial forces, and the marking was simply "T.33" on the left temple, with the size marking under it.

After that, the T.33 was the 5th gas mask approved by the S.C.M. (Servizio Chimico Militare, chemical military service) on 31 August 1934 to be sold to civilians, and the masks produced were marked with the full license on the side. 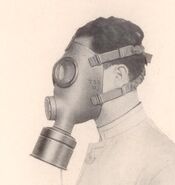 T.33 from before the S.C.M. license (note the marking) 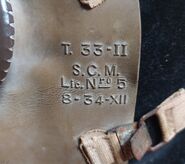 S.C.M. marking
Add a photo to this gallery

The exhale valve cover design varied over time, as at first, the mask was sold with a flat, gear-like cover, while later models had a rounder cover. Those covers are fully exchangeable and differ only in shape. 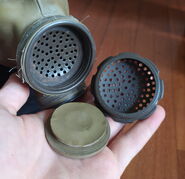 Sample with round exhale valve cover 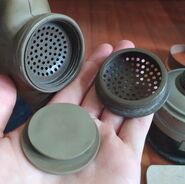 Disassembled
Add a photo to this gallery

The strap system could be either the regular, five-straps system like the one of the later T.35 or else it could be one that sports a hook system for the 2 lower straps, with 3 fixed straps. The latter of the two would be later used by the Ajax F2. 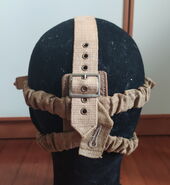 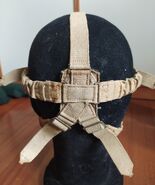 Civilian T.33 masks were issued with a civilian filter (usually Dirzepo filters on later kits, but also occasionally Pir. 35 or T.35 filters), a tube carrier, anti-fogging soap (in alternative anti-fogging lenses on later kit) and a spare exhale valve in a small box. 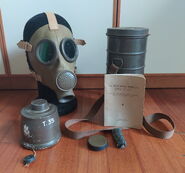 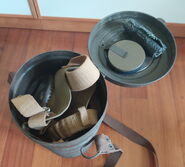 T.33 in its carrier, with the spare exhale valve and the anti-fogging soap in position

Spare exhale valve
Add a photo to this gallery

Industrial T.33 masks had various available accessories. Starting from the filter, the mask could be issued with either a Dirin filter which was directly threaded to the mask or a larger filter (Tubin or Turnivercio) connected through a pleated hose of varying length. Those large filters could be carried either with a dedicated cage carrier or a standard Pirelli carrier-case. The mask was stored either in a metal box, a carrier-case or a Pirelli tube carrier, with the latter available only with T.33s with Dirin filters. The mask could also be sold with anti-fogging soap, anti-fogging lenses and spare exhale valves. 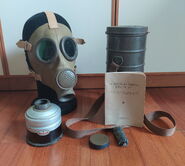 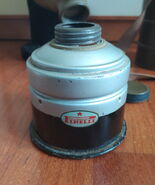 The filter from up close
Add a photo to this gallery

The Ajax F2 was a French licensed copy of the Italian T.33 that sported a 42 mm thread. 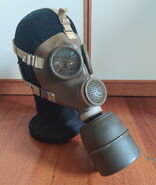 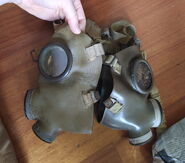 A T.33 compared to an Ajax F2
Add a photo to this gallery

Add a photo to this gallery
Retrieved from "https://gasmaskandrespirator.fandom.com/wiki/T.33?oldid=33174"
Community content is available under CC-BY-SA unless otherwise noted.