The T.35 filter was the standard small filter of the Italian army during the Second World War.

The Dirzepo, Pir. 35, P.C. 35 and R.S. 37 filters were a variant of this filter, identical in every aspect with the exception of colour and markings.

The T.35 filter was a brown-painted metal box containing a layer of particulate filtering material made of resin-impregnated wool and viscose rayon at the bottom and a layer of activated charcoal, pumice and other blocking substances at the top (note: it's been confirmed that no asbestos is present in the filter[1]). Before being opened, the bottom intake is covered by a small sheet of waxed canvas and the top is closed using a 40 mm lid, with all of this bound with a string closed using a small lead seal. After the filter has been opened for the first time, it could be closed again using the 40mm lid and a small rubber seal attached through a string to the filter.

The height and weight of the filter vary with the date of production and manufacturer. The production ceased in 1943. 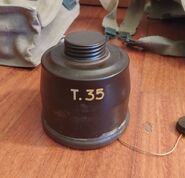 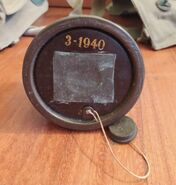 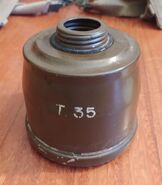 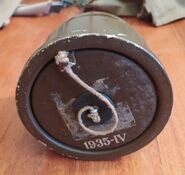 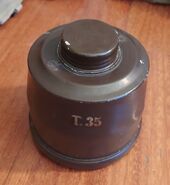 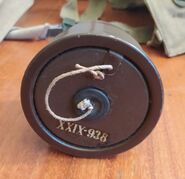 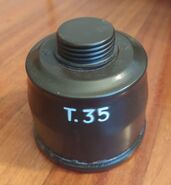 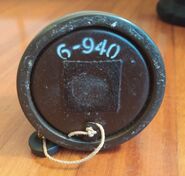 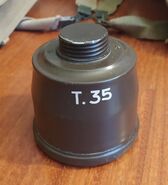 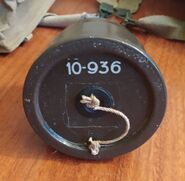 Differences between an early production filter (left) and a late production one (right). Note the difference in height

T.35 filter made in February 1943
Add a photo to this gallery

After the end of the Spanish Civil War, the government set out to gather all of the various gas equipment issued by both sides, in an effort to re-issue said equipment in a standardized way. The filters that were found had a label added around them that said: "Filtro procedente de recuperación" (recovery filter), and under that the number of the factory (for example: "Fábrica n.3"). 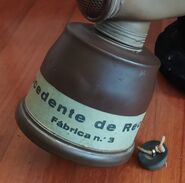 Recovery Pirelli filter
Add a photo to this gallery

T.35 kits made specifically for the UNPA (Unione Nazionale Protezione Antiaerea, national union for air-raids defence) used a specially marked T.35 filter. The filters made by Pirelli for this purpose were coloured orange, while I.A.C. ones were the usual brown and had "U.N.P.A." marked on the side. 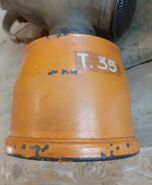 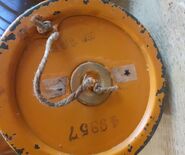 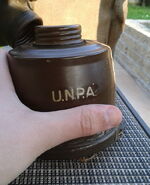 IAC UNPA filter
Add a photo to this gallery

Retrieved from "https://gasmaskandrespirator.fandom.com/wiki/T.35_filter?oldid=40504"
Community content is available under CC-BY-SA unless otherwise noted.