Edit
watch 02:56
Doctor Strange in The Multiverse o Madness - The Loop
Do you like this video?
Play Sound

The early Wz.32 with filter and hose

The Wz. 32 was the standard military issue gas mask in Poland until around the early 1950s, when the Maska typu cywilnego / Polish GP-4, and later the SzM-41 series were adopted. The mask itself was designed and put into service just before the later part of 1932. The mask was made in its first model had a dull grey, green or blue fabric facepiece. The inside of the mask was glazed with a smooth black rubber, as opposed to other masks around the same era, mostly used rough rubber to adhere to the user's face.

Like the German designs from the era, it uses a peripheral seal around the facepiece, fashioned of a soft tan fabric, with hand-sewn stitches. The fabric is folded to the outside of the mask and then folded over and a layer of fabric glue and fabric tape are laid over it. It uses a dual seam around the mask, with double stitching and bars in parts to make sure the fabric is solid. The backing to the facepiece is a dull olive drab colour, while the oral nasal cup is a dark black rubber, while the back of the oral-nasal cup is made of a tan material, similar in texture and durability to the outer mask covering. The bridge portion extends past, and behind the peripheral seal, and has approximately 5 mm of yellow, shag material meant to resist irritation to the user's face and nose.

The entire breathing portion is contained within the oral-nasal cup. The inhale portion is a large steel disc, that contains a large rubber flap, to keep air from entering the filter, and thus being forced out of the brass hole just below it, that leads into the guarded flapper valve. The flapper valve guard is very easily removable, it uses a system, that in layman's terms, can be thought of as a "nut and bolt system". There is a counterbored portion of the brass from the outside, that the flapper valve is pinched in, and then the steel cover is slid over it, and there are threads exposed at this point. A small "nut" that looks similar to a metal, hollow bottle cap is then slid over the apparatus and tightened down. Just above the flapper valve assembly is the intake.

The thread is a 42 mm one, just like one the previous Wz.24. It is put into a recessed portion of fabric, and the facepiece is folded over and pinched into the brass assembly. It uses the standard thread style and a rubber o-ring. It leads to a ramp, that splits the air into two sides and then hits the rubber seal, and into the user's lungs. The eyepieces are recessed back into the facepiece and are crimped on the inside. It consists of a steel ring, with brass holding the glass on the outside. It is very thick, real glass, not plastic as seen on many other masks. The nose bridge extends about 10 mm past the eyepieces. The head harness buckles are attached to the faceblank via vulcanisation and sewing. It uses a 7-point black fabric elastic head harness with thin white stripes running down the middle until it hits the head thin, long head harness pad. Now, the lower-left buckle it not attached to a strap.

It uses a very thin, non-elastic strip, hooked to a metal loop, that is sewn on. The lower left harness strap is threaded through a buckle at the very bottom of the head harness, and on the other side, is a pull tab to adjust the length, and a D ring. The D ring is meant to be left unhooked, and the head harness bottom straps can be pulled loose, mask put on, and having the straps pre-tightened, all the user must do is hook the D ring.  The strap buckles have the rolled up edges up into a small cylinder, then a brass clamp put over it, giving grip on the cylindrical adjustment tabs. The later, full rubber mask varies little, but the head harness is a bit thicker at the attach points, and the flapper valve front is left open.

The mask also feature a neck strap.  The neck strap is a twist sewn olive drab strap and is again sewn, glued, and taped to the mask.  Now, onto the hose. Early masks are commonly seen with tan hoses. It is shorter and fatter than the later rubber hoses. Unlike most hoses, it does not have a thumb guard on the male side, to assist with tightening, and simply flows from fabric to the metal 42 mm threads. The hose is very fat and moderate in length. The standard-issue filter for this mask is a large metal, brown filter meant to be stowed in the bag when in use. It is semi-oval shaped, with large ribs down the side, leading to the bottom. The entire bottom portion of the filter is an intake, it has, small triangle holes all over the bottom, as to cut down on the chances of the intake being plugged up in the bag.

Contrary to the R.S.C. masks, which were carried in tin, cylindrical containers with an opening lid, to the Wz.32 was intended for a canvas bag with a webbing shoulder strap. There were two compartments inside, and a wire support at the bottom to help keep the shape of the bag. In the short version for vehicle crews, they also had a carabiner system that made it possible to carry the bag on the chest while driving. They were made of a mustard-colored tarpaulin, although they are also found in other shades of green. Unfortunately, these bags were not very durable and wore quickly, which can be found in the memories of soldiers, such as captain. E. Ksyka from the 9th Małopolska Lancers Regiment, who received masks on the eve of the war from the mobilization warehouse: “Each soldier receives a new gas mask. The mask, apart from its essential values, is much more comfortable to wear than the mask we have used so far. It is not in a metal can, but in a soft canvas bag. This canvas bag looked very solid, but it turned out to be impractical. After three weeks, holes formed in it as a result of rubbing against the side of the rear pommel of the saddle, not only at trot, but even at walk[1].

In 1934, the Minister of Armaments, General Paul Angelescu, informed the delegation of the Polish military industry that Romania was going to introduce the Polish wz.32 mask as a basic weapon. This meant a large order for the Polish industry. Romania also wanted to start its own production of these masks. There was a show in front of King Charles II, who was personally interested. After this event, the minister suggested to Lt. Col. Kowalewski that Romania should be granted a license and technical assistance in the construction of an activated carbon plant (it was used as a contribution to sinks). It was agreed that the agreement would be concluded in the form of an inter-ministerial convention (inter alia to avoid the tendering form) binding the Ministry of the Interior and the Romanian Ministry of Armaments. The slogan was the unification of anti-gas equipment of two friendly armies. On October 16, 1934, the Polish side undertook to provide 50,000 wz.32 masks, transfer license rights free of charge and provide technical assistance in the construction of a factory in Bucharest.

On November 20, 1934, Romania purchased 30 tons of activated carbon, which provided it with the help of specialists from the Military Rocket Factory in Skarżysko in the construction of a coal plant in Romania. The order was extended to 100,000 units on December 13, 1934 for PLN 3,400,000. Additionally, the plans and cost estimate for the construction of the plant were sold for PLN 5,000. In the spring of 1935, MSWojsk. commissioned subordinate plants to purchase domestic and foreign sets of machines for the Romanian plant being launched. Poland also supplied Romania with parts and semi-finished products at the initial stage of production. In 1936, two more interministerial conventions in the field of chemical defense were signed. On January 14, 1936, Romania was given a free right to produce the so-called small absorbers for civilian masks wz.32, and on March 27, 1936, in exchange for 200,000 zlotys, it was agreed that the license would be used by the private industry in Romania.

The Romanian version was marked as "mod.32". The only difference was the Romanian instruction manual and a different stamp on the flap and signature on the canister. From 1938, masks were produced in the "Stradom" factory in Częstochowa. The designation wz.38 appeared on the bags, which may suggest a change in the mask model. The difference was small, as there was a slight change to the facial part of the mask[1]. 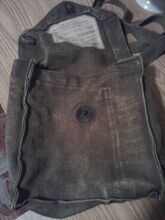 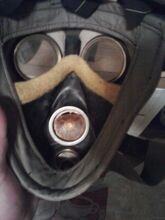 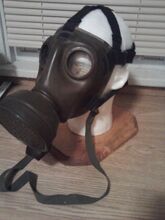 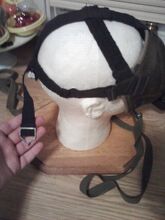 Better view of the late type head harness, the bottom strap is fully extended, better shot of the clamp system, mask is a size small, doesn't come close to fitting my foam head. Note the gaps. 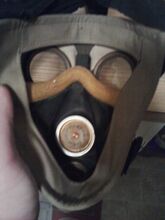 Interior of the late model Wz.32 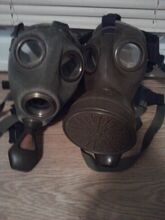