The XM28 was competitor against the XM27 prototype gas mask to replace the M17.

Due to the M17's excessive weight, the XM27 was essentially an M17 made out of transparent silicone instead of rubber(Xm27a2 was made of grey rubber , similar to that seen on ww2 US masks), and so was far more foldable than the original M17. It was also far lighter, a factor which proved beneficial to the troops in Vietnam. The XM27 weighed 1.1kg (2.5 pounds) while the XM28 weighed a far lower – 0.39kg (14 ounces).

Due to its improved flexibility, the XM27 could be packed into a small water proof bag, instead of the larger canvas carrier bag the M17 used. The M17 was carried on the leg of the wearer, which meant there was a higher risk of exposing the mask and carrier bag to water when wading through bodies of water, and due to the mask's weight, the carrier bag would often slip down the side of the leg, resulting in filter damage from the exposure to water.

Both masks were developed in 1966, by Edgewood Arsenal when the 1st Cavalry and 1st Infantry Division requested a compact, lightweight protective mask. The XM27 was discarded because of its extra weight. Throughout a two year period the XM28 was upgraded 4 times (hence the E4 designation). Full-scale production of the XM28 began in 1968. Since very few XM27s were produced, finding an example of one is highly unlikely.

The XM28 was created as a defense against RCAs (Riot Control Agents) such a Tear Gas, as specified on its carrier bag. The mask was used when American troops used Tear Gas to clear out caves and tunnels systems, operated by the Viet cong.

The mask is molded of matte silicone, and used perspex lenses that are glued onto the mask. The mask fits on the head with a 6-point head harness. The exhale valve is located behind the chin. The mask’s shape allows it to be folded and placed in a small carrier bag which can be carried on a belt or on the soldier’s STABO harness. The mask had plastic strips on the inside to prevent its shape from being lost. Putting the mask into the carrier bag was frustrating to do as it is nearly impossible to properly fit it in.

Front View of the XM28E4

Plastic used to retain the mask's shape and chin strap

Similar markings on the mask 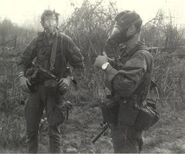 American soldiers wearing the XM28E4
Add a photo to this gallery

Retrieved from "https://gasmaskandrespirator.fandom.com/wiki/XM28E4?oldid=38730"
Community content is available under CC-BY-SA unless otherwise noted.