The XM-44 series of protective masks were developed as part of the Soldier Integrated Protective Ensemble (SIPE) program. It was designed for use with special electronic equipment such as a helmet-mounted heads up display and thermal weapons sights. The aim of the SIPE program was to make the individual soldier more effective at identifying targets and communicating with friendly forces as well as making protective gear more comfortable and effective.

The mask consisted of a silicone rubber facepiece with close-fitting eyepieces developed to improve the soldier's peripheral vision. Inside the mask, there was a protected drinking tube so that the wearer could hydrate in a contaminated environment, this tube led out to the exhale valve cover. There was also a frontal and side voicemitter, the latter could be switched out to accomidate a filter canister or hose, depending on the wearer's dominant hand.

The chemical protective hood was made of butyl rubber-coated nylon cloth that was bonded to a butyl (second skin) in order to protect the wearer from chemical and biological droplets/aerosols and to protect the silicone facepiece in the event that the wearer comes in contact with a mustard agent.

The amount of actual XM-44 variants is unknown, but collectors have managed to identify at least 3 variants:

"M42" Variants - This variant has an M42-style primary voicemitter. The mask has been seen with either an MCU-2/P or XM-33 outlet valve cover (presumably randomly changed due to SIPE testing).

Blower Variant - FirebirdJP discovered that his XM-44 had a spring incorporated into the exhale valve, this was theorized to be a special device to create more resistance for air leaving the mask, due to the fact that the XM-44 prototypes were sometimes used with blower units.

It is unknown if the XM-44 had its own specific carrier. It is believed that repurposed M13-series carriers were used during the testing.

TooBigToFit acquired an XM-44 hood that incorporated stereo earbuds into the hood liner. These earbuds are theorized to have been used with the electronic communication equipment that was included in the protective ensemble. 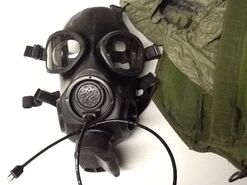 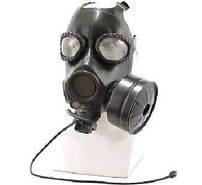