The Zelinsky Kummant, also known as Avalov mask, was designed by Nikolai D. Zelinsky (filter) and Mikhail I. Kummant (facepiece). It was the first successful charcoal filtering mask however most of the Russian troops had to use British Small Box Respirator and PHG/PH Hood.

There were 2 types of facepiece. Both are made of glued light red rubber. The Avalov Facepiece had celluloid lenses and a "finger horn" which allowed the user to insert a finger inside to wipe the lenses while the other one which called Mining Institute or Prince of Oldenburg facepiece had smaller glass eyepieces and had no "finger horn". Later during the First World War Davidovich Joseph Avalov upgraded the Zelinsky-Kummant mask by adding an extra, hollow segment to the Petrogradtsky filter which included an outlet valve, which was prone to damage at first, but later hid it within the filter to protect it.

There were 3 types of filters: Petrogratsky (rectangular), Moskovsky (tall oval) and Kazenny (shorter oval) all had a cap which contained the mask itself and the substances were also the same.

After the war radio operator and rebreather masks were made based on the Zelinsky Kummant.

In 1915, the need for a gas mask arose. A chemist, Nikolay Zelinsky was tasked with creating a gas mask for the Imperial Russian army immediately. Early models of the filter had natrium lime put in to absorb the gas and let oxygen flow through. However, in 1916, Nikolay noticed how activated charcoal was used to filter liquors and implemented this idea into the gas mask. This gas mask introduced many modern ideas into its design that are still used today, such as activated charcoal filters and being manufactured out of rubber. It is very likely that after the First World War the mask was exported to Romania, Finland and Turkey.

Got masks from Russia as a war effort against Austria-Hungary.

In 1929 Finland had 87 500 of these masks, but they were already out-of-date. Despite of that the Army had to use them in Winter War. Nokia, the later producer of the M/30 and other masks in Finland made Zelinsky Kummant masks during the First World War because that time Finland was part of the Russian Empire.

Dimensions of the facepiece. 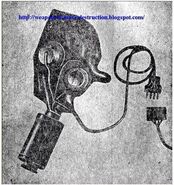 "Gas is not scary when there is a gas mask!" 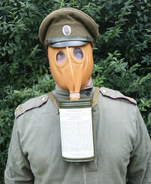 Russian officer and two soldiers with the masks